Coo wears blue frequently.  She has beautiful blue eyes and wearing blue suits her incredibly well.
But this is what I hear so often:
"Isn't he cute?"
What? 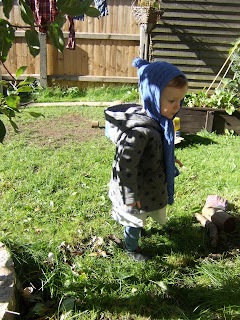 Her pixie hat was pale pink when it arrived in our house in a bag of second-hand clothes from a friend.  However, sky blue looks better on Coo!
Have you noticed how severely divided the colour spectrum is in today's Western culture when it comes to children's clothing?
I was looking at some of my childhood photos recently and was surprised to notice that the majority of the small children's clothes worn by me, my siblings, and my friends were, until the mid -1980s, fairly non-gender specific.  So, for example, my sister appears in a photo wearing light brown corduroy dungarees that had first been worn by me, and then my brother.  Of course, we wore dresses and feminine clothing too, but they were just as often in shades of blue, green, and brown as they were pink or purple.
Maybe it's cultural, too.  I don't remember accurately enough what it's like in the US, but sometimes, here in the UK, I  feel as if I've had a bath in pink just by walking through a Mothercare shop to use the toilets.  It's so easy to spot a baby girl; in fact, you can be incredibly accurate from twenty feet away even, because she's always wearing pink!
Fortunately I'm not too worried about the fact that sometimes people think Coo's a boy when she's wearing blue.
Because someday soon she will find her voice, and she'll speak up and set them straight herself!
I can't wait to hear her do it...
Posted by Erin at 9:07 pm