:: Children of the Forest :: a book review 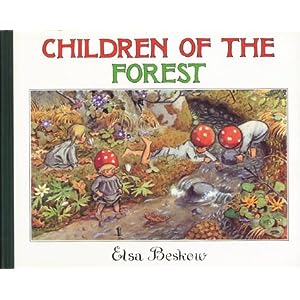 The Children of the Forest
by Elsa Beskow

Beautiful illustrations in muted earthy tones of brown, green, and red are accompanied by a unique, old-fashioned story, written by Swedish author Elsa Beskow. A tiny family, four children and their parents, live in a forest.  The children spend their time playing together, interacting with the animals living near them, and helping their parents in a life of richly creative survival.  "The children picked cotton grass and combed it smooth so their mother could spin it into silky thread.  Then she would weave it into rugs, or knit pretty, creamy-white sweaters for the winter."

This story details a year in their world, slowly unfolding in front of the backdrop of the earth around them and the changing seasons.  It is a gentle tale, with a softness in the pictures and the words that calms restless miniature people.  "That evening, sleepy and warm, the children sat round the fire, listening to their father telling stories his father told him when he was a boy, about trolls and fairies, storms and strange cities from long ago."

The perfect bedtime storybook!  We purchased the larger version on Amazon, but a smaller edition is also available -just as readable but less than half the size.  I've already given this book as a birthday gift to a friend of Coo's.  The animals and small people appeal to a wide range of kids both younger and older, as well as ones who aren't usually likely to sit through longer reading sessions, like my Mr J.
Posted by Erin at 12:04 pm