Supplies for my first try at making soap have been sitting in the under-the-stairs cupboard since December 2010.
Yes, I readily admit this.  My life is full of half-begun creative projects, including but not limited to patchwork; knitting; baby blankets; kids' clothing, embroidery; and a book manuscript with 114,000 words written so far.
Slowly and steadily, I do finish numerous projects.  But I start so many that the finishing rate probably sits at around fifty percent.
So anyway, these supplies have been languishing in the dark for so long. Yesterday, out they finally came. Conditions were perfect. My brain was finally back in semi-working order after I had been awake for over forty hours earlier in the week for the birth of Emma's babies.  The four kids and Daddy were off to Nanny's house for the afternoon, and the house was unusually still and quiet.
My soap-making mentor is my sister Emily's friend, whom I met in the spring of 2010.  Jill made large batches of really yummy-smelling soap and taught others to do the same. As I chatted with her,  I recalled my initial desire to make soap back in the spring of 2002, when I was pregnant with my twin boys. A definite decision to make my own soap was now quickly added to my miles-long mental list of Things I Must Make Before I Die.
Yesterday afternoon, armed with a long e-mail from Jill and the simplest soap-making book I could find [Smart Soapmaking, by Anne L Watson], I began to prepare. In the loud silence of an empty house, I set out all my supplies.  I drank a few cups of French-press coffee to ensure that my mental activity would be extra sharp.  After the slow, calculated prep time, the process began, and was over before I knew it. Preparation and clean-up probably took three times as long as the actual soap-making!  I used the simplest recipe from Anne L Watson's book, fragranced it with patchouli and lavender essential oils, and poured it into a shallow cardboard box for a mould. 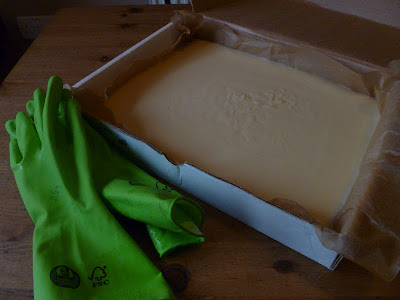 After the soap had set for about twenty-four hours, I cut it into bars and am now leaving it to cure for a few weeks before trying Jill's technique for testing new soap's readiness for use: touching it with the tip of my tongue! If it makes my tongue tingle, it won't be quite cured yet. If there's no taste stronger than a woody lavender, then it should be ready for use.  There are more technical means of testing how a soap is curing, like purchasing PH strips, but I think a lick in time saves £4.99! 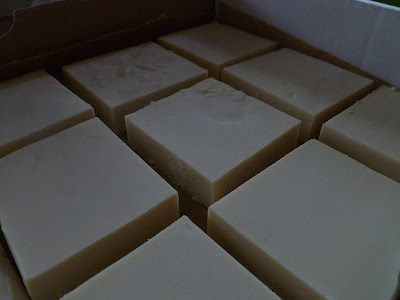 Below are the soap ingredients, not including the lye: "Lye soap" as handmade cold process soap is sometimes called, is not harsh on your skin.  No actual lye remains in finished cold process soap that's been made and cured properly.  "Lye", or sodium hydroxide, has a chemical reaction with the oils which are the only other ingredients, and together, they create soap.