I love freshly made corn tortillas.  There really is nothing like them; eaten merely rolled up with a bit of salsa, they're perfect.

After years --twelve, to be exact-- of buying plasticky packs of Old El Paso Corn Tortillas [anyone else ever notice they taste like dog food smells?] I decided I'd had enough.

I researched a few different UK suppliers who sell cast iron tortillas presses, and bought the cheapest one here.  I was very distracted by everything I found at Casa Mexico.  Old Mexican style has been one of my favourites since visiting the Historical Museum of the Mexican Revolution.  I would love to have a wool saltillo blanket and some talavera tiles!

Then I purchased a few bags of masa harina, which is maize ground especially for tortilla making.

I was so excited about this tortilla press and what I was going to do with it that I talked about it with everyone, even people who would totally not be interested in a tortilla press!  I spoke about it to friends who like to cook, and they could definitely appreciate my excitement over it. But it was when I blabbing away to someone who doesn't even know what corn tortillas even are that I realised I needed to calm down a little bit.  Especially since I hadn't even made them yet.

The tortilla press arrived before the flour.  It has a lovely aqua blue finish over the cast iron, but I'm guessing it was made in India and not Mexico, because it says "Shakti" across the lid. There's definitely an Indian connection going on there.  It could probably double as a puri press.

I washed it carefully and cut two plastic circles from a ziplock bag as directed, to place the balls of dough between before pressing. Then I put the tortilla press away and waited for the masa harina to arrive.  And waited, and waited.  Finally, it arrived.

As soon as I had time, I set to work.  Using an amalgamation of the simple instructions that came with the tortilla press, and the recipe on the masa bag, I mixed a few cups of masa harina with hot water and a bit of salt for extra flavour.  The resulting dough looked like this: 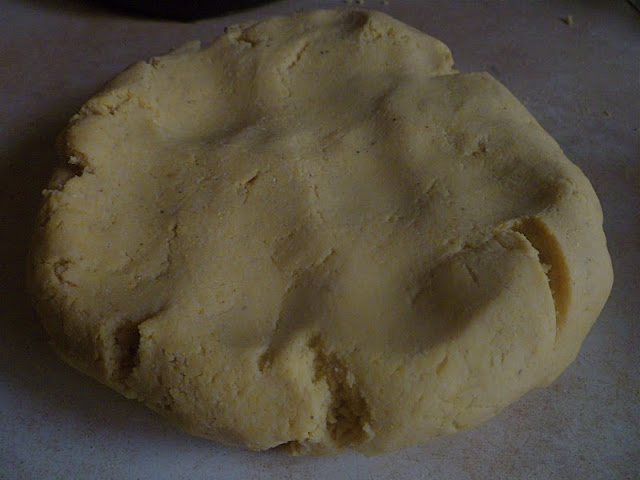 After leaving it to rest under a tea towel while I made coffee and peanut butter cookies, and helped the kids clean up from lunch, I went back to it and rolled out twenty-six "walnut-sized pieces". 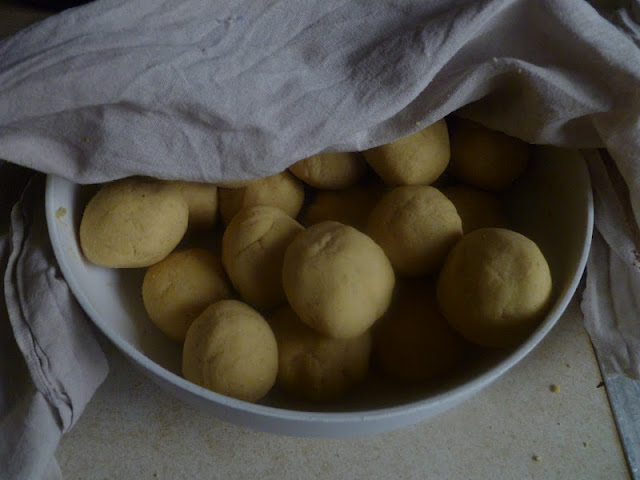 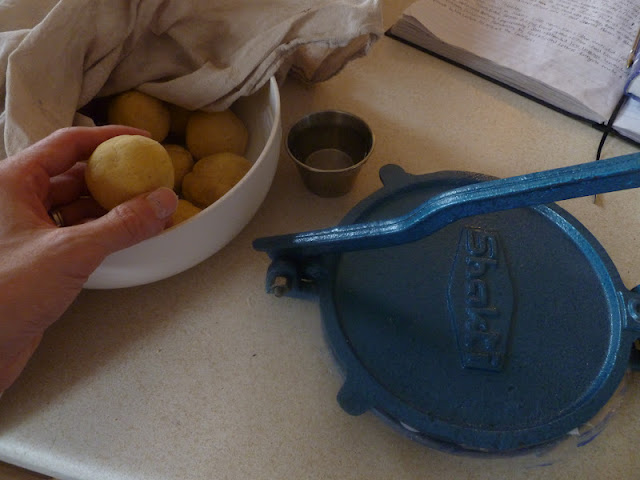 Each piece went to the hallowed press next. 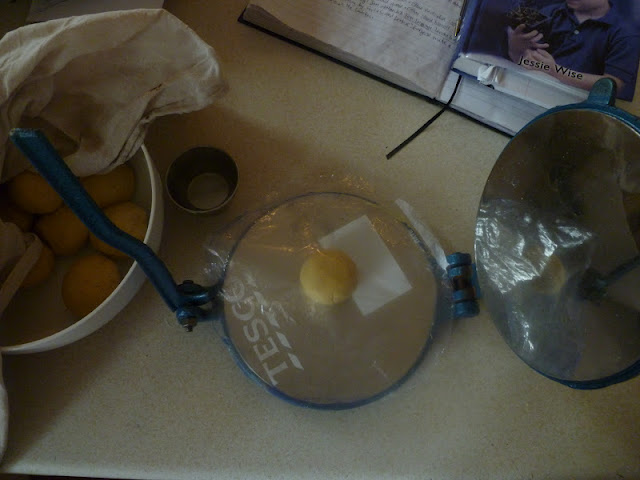 And then to the hot griddle.  After a few seconds, the edges began to curl up: 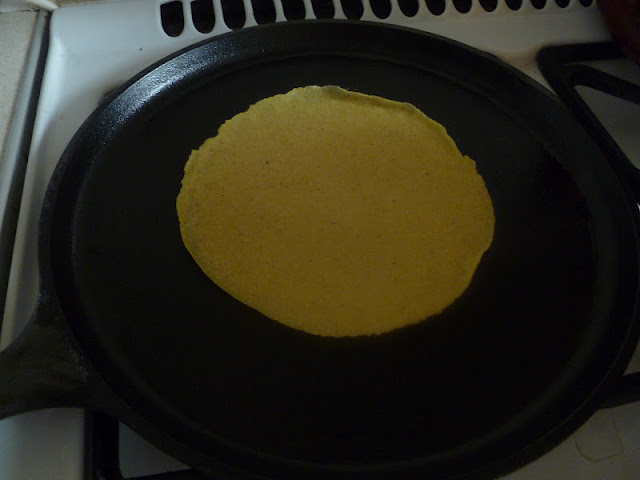 Which meant it was time to flip it, and cook on the other side until brown specks started to appear on the surface.  I flipped the tortilla for the second time, and watched as the tortilla swelled and puffed up from the heat.  After a few seconds, I swiftly removed it to a plate and started again.  After a while the process became easier and faster. 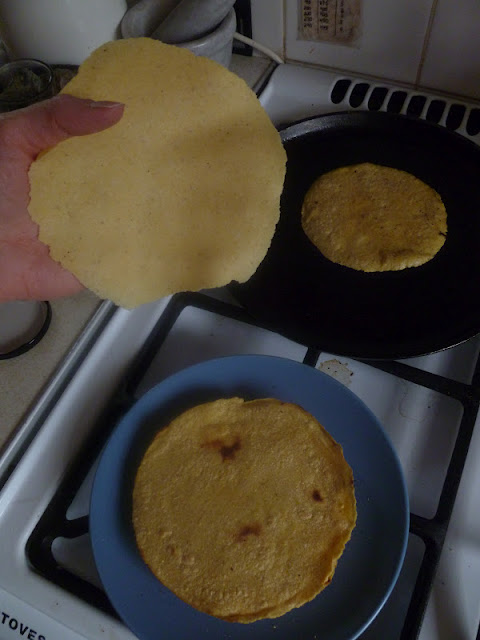 I would say that a second pair of hands in the making would have been helpful.  Not that I was without assistance... 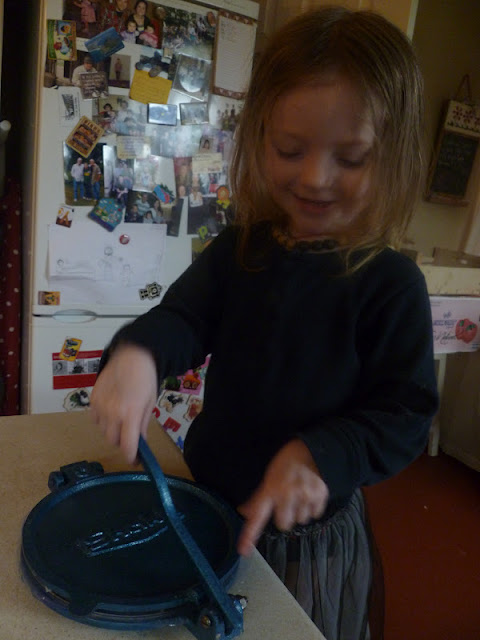 I didn't bother with keeping the tortillas hot, as we weren't eating them right away.  They can be wrapped in a tea-towel and steamed [which I experimented with, and it does work, making them soft and pliable again] but we were having quesedillas for tea. Three cooked tortillas were heated on the griddle at a time, and I added a few slices of cheese to each, then placed another tortilla on top, like a sandwich.  We ate them with a sprouted lentil, beetroot, and carrot salsa. 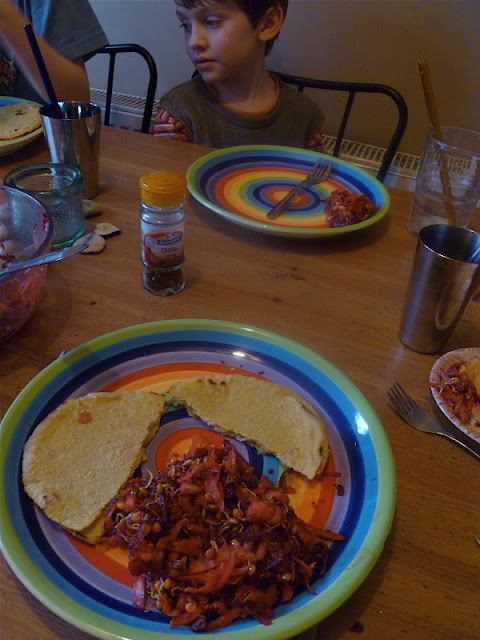 Eating fresh corn tortillas inspired me to unearth old journal entries from my trip to Chihuahua, when I was sixteen.

"Everything is very flat, dry and dusty. In the distance, you can see pointy mountain tops reaching their smoky grey tips to the pure blue sky.  The roads are straight and stretch far, far away.  Round clumps of shrivelled, tangled grasses grow in the desert-like soil. Somehow, they have shades of green in them; I can't conceive an idea of how they stay that way in such an arid climate. The sunlight somehow seems brighter and cleaner than home, probably because of the lack of humidity in the air.  When you breathe, your throat instantly feels dry and as a result, I found myself swallowing constantly at first.  I saw all this before the sun set; it was dark when we arrived in Chihuahua city."

And the final paragraph of my sixteen-year-old musings about the trip:

"The flight from El Paso was smooth and comfortable, so different after travelling in vans and buses.  I sat beside a Mormon missionary who had just been to visit her sister in Mexico. She seemed lonely and talked the entire time.  She had a cat with AIDS that she spent a lot of money on. When we landed in Chicago it was dark and there were thousands of tiny lights twinkling below us."

Since then, violence from the Mexican drug war has torn Chihuahua apart.  Photographs in a Times newspaper photo-journal recently caught my eye, because they were taken in a mountain village in Chihuahua state. Then I wished I hadn't looked, because the images of drugs-related murders [including small children] were so graphic that they've stayed with me.

I'd rather remember the good things about Mexico, even if they're as simple as deliciously fresh corn tortillas.
Posted by Erin at 11:00 pm