As a family, we've been discussing the historical significance of this year's Diamond Jubilee, celebrating the 60 years that Queen Elizabeth II has reigned.  I've impressed upon the boys the fact that they will probably not see another Jubilee like this in their lifetimes.  If the Queen reigns for another three years, she will surpass the years of Queen Victoria and take Victoria's place as the longest-reigning monarch in British history and the longest-reigning female monarch in the world. So, yes, we do love history in our house!

The traditional British end-of-May Monday bank holiday was moved ahead to this weekend to coincide with the date of the actual Jubilee, marked on the Queen's official birthday, Tuesday, the fifth of June.  This was done to create a four-day weekend.  It feels as if the entire country has been celebrating!

We decided to spend the Monday bank holiday at Coughton Court, a National Trust property in Warwickshire. One of the country's many Jubilee beacons was being lit at Coughton just after dark, and we knew how much the sight of a blazing conflagration would help the kids remember the day!

After a slow morning we packed a picnic for tea and set off, arriving around 2.  Before setting foot outside the car, we ate up the remainders of the Jubilee cheesecake I had made for our usual Sunday night open house.

Even though the weather forecast had included rain, we were thankful to be met by sunny skies and warm temperatures. 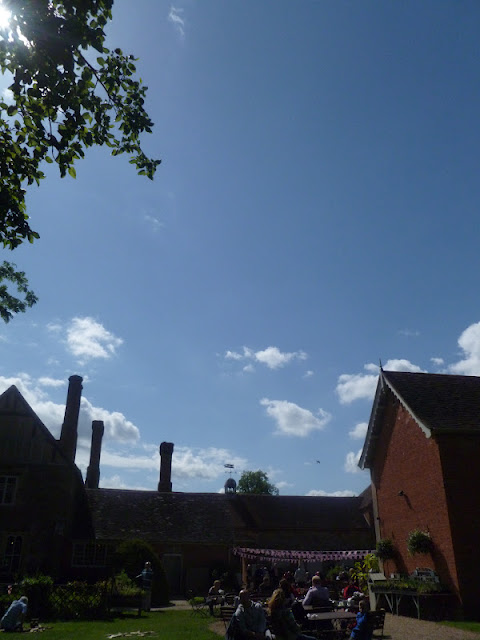 The boys opted to do a "Royal-T" bunting hunt around the grounds and gardens with Dan, while I took Coo to the children's play area.  She easily made two new friends and amused herself with them for quite some time. 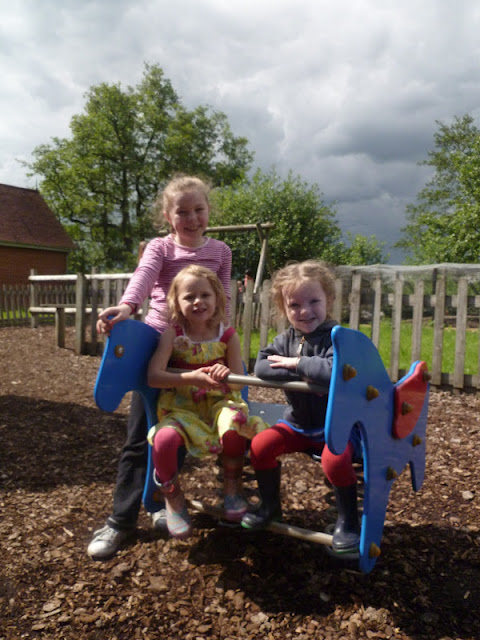 When we were together again, we headed indoors to view the house.  Members of the ancient Throckmorton family still reside in the home, but the main part of it is open to visitors. 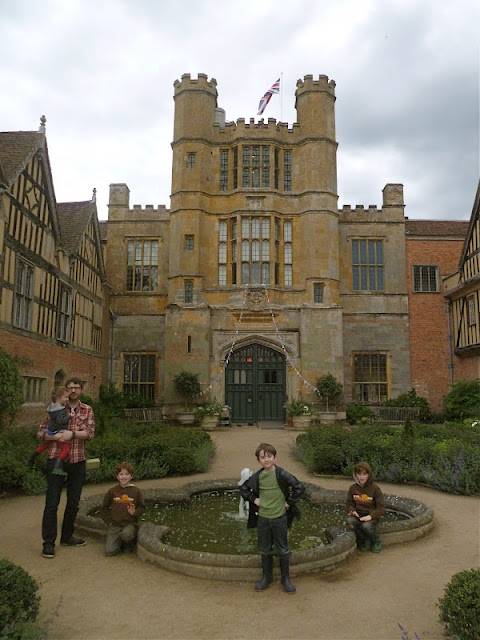 Coughton Court itself is very simply constructed, probably because it wasn't the primary residence of the family for many centuries.  During Georgian times, many homes like this were being built around, expanded upon in opulent fashion, and sometimes destroyed altogether by their wealthy owners in favour of more fashionably grand homes. Somehow Coughton managed to escape renovations and remained the Elizabethan Tudor house that it is.  It now also retains some of the Jacobean features that adorned other long-lost Throckmorton properties, like a beautiful wooden staircase.

This house was just the right size to keep the kids interested.  They were fascinated with the model of Sir Walter Raleigh's head, peeping out of a bag.  [Tradition has it that his wife, Bess Throckmorton, carried poor Sir Walter's head around with her for 28 years after his execution!] Coughton Court is famous for being associated with two ill-fated rebellions: the Throckmorton Plot [to assassinate Queen Elizabeth I] and the Gunpowder Plot [to blow up the houses of Parliament --old Guy Fawkes took the rap for that one].

Coo and I found a very old painting of a little girl who looked about her age. 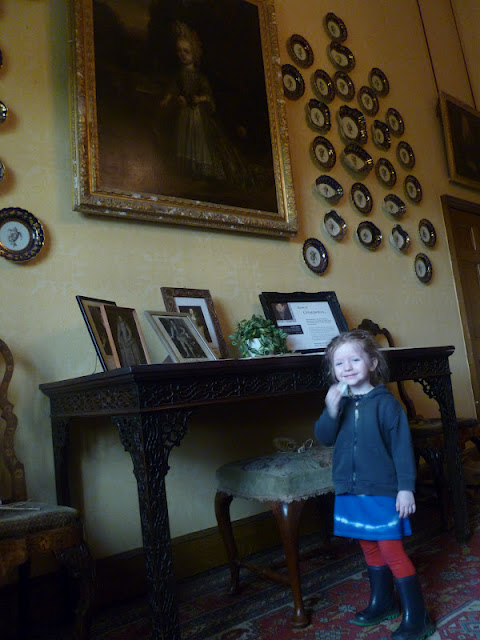 The boys loved peering down into the illuminated "priest hole". 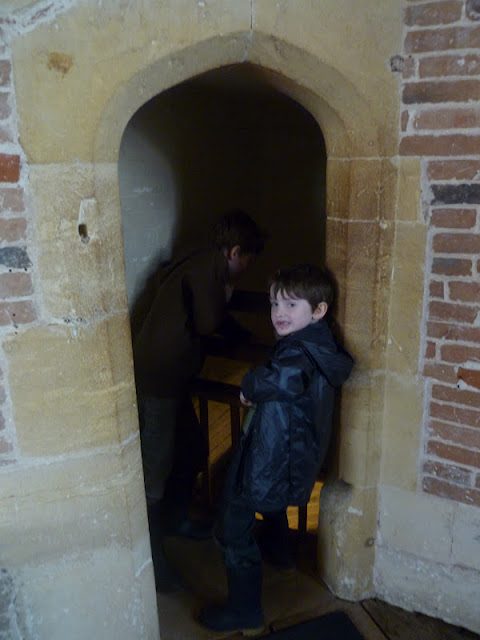 and running up the circular stone stairs [not unlike climbing the Scott Monument, just much shorter!] to the roof. 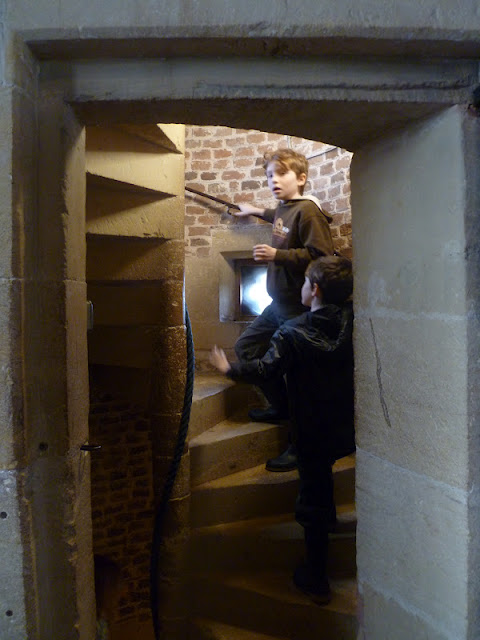 The roof area was quite safe for the kids, and we all enjoyed the views of the surrounding countryside, as well as the sight of the wooden beacon that had been specially constructed for the evening's festivities. 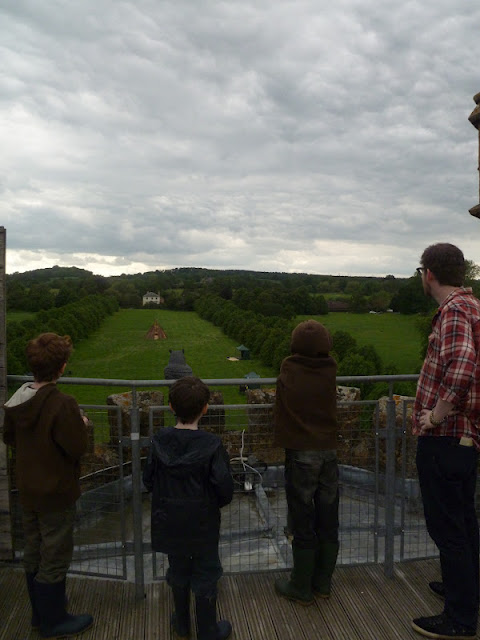 The gardens at Coughton are award-winning, managed and tended by members of the Throckmorton family.  A kind stranger snapped this photo for us, standing on the lawn behind the house. 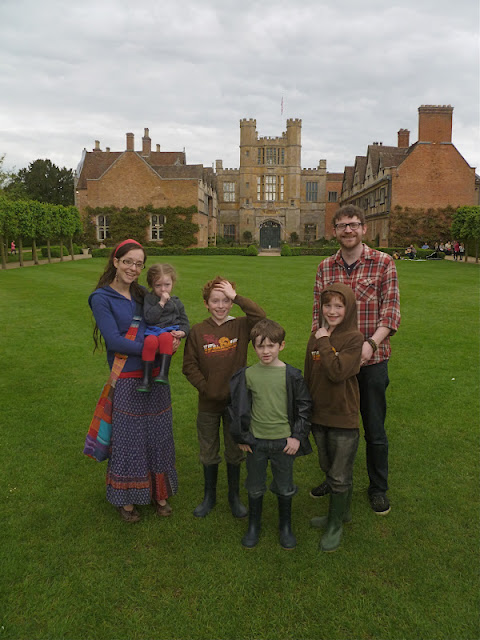 We went back to the car to rest and munch our picnic: houmous, with a variety of yummy stuff to dip in it: cucumbers, carrots, peppers, tomatoes, and oatcakes. Everyone seemed quite full by the time we'd finished off all the food, and they were ready to listen to Dan read aloud the bedtime books: The Fellowship of the Ring for Mr J, and Brisingr for Lefty and Righty. I read a bit from The House at Pooh Corner to Coo, but she was more interested in rolling the car window up and down repeatedly.

Finally we trekked over to the open field in front of the house, where the wooden structure for the beacon had already been constructed.  Crowds began to fill up the grassy space, and we dropped our blanket down onto the [thankfully] dry ground. 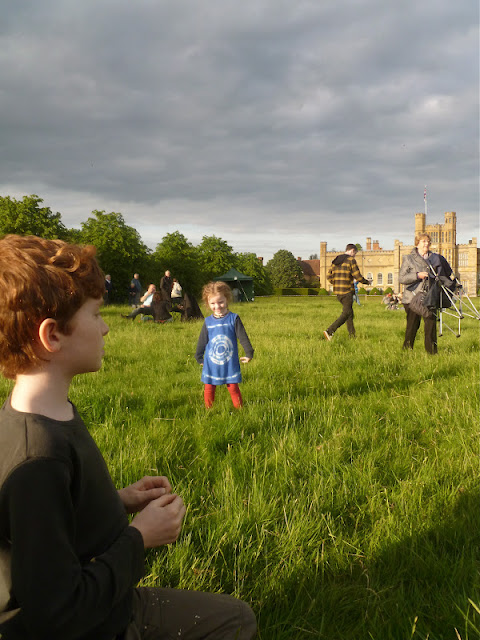 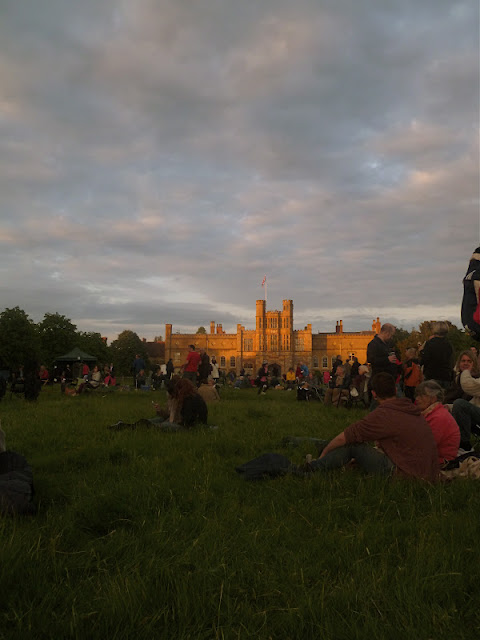 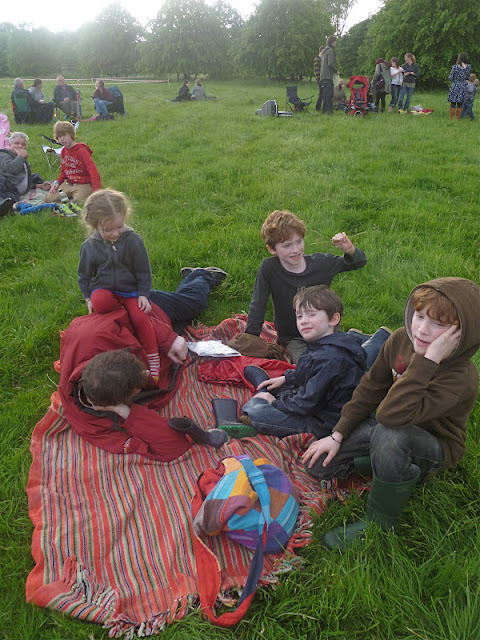 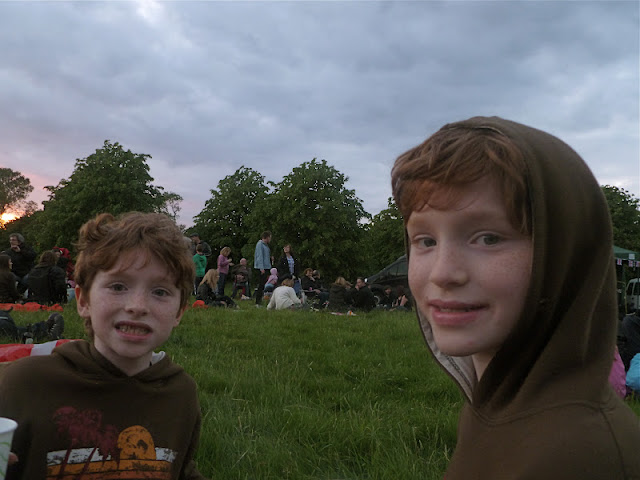 Barbecue food was available for a small cost, and the three boys marched over to wait their turn in a very long line.  Mr J and Lefty returned, happy, with sausages; Righty felt privileged to be one of the final few who received a baked potato!

Meanwhile, Coo passed out from the exertions of the day, and we enjoyed several sets of live music performances. 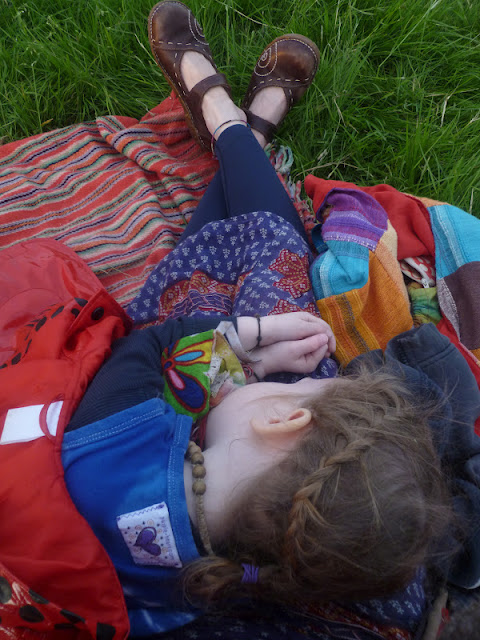 Finally, at quarter to ten, bells from one of the two churches on the grounds of the estate began to ring.  Then, at 22:01, the beacon was lit. 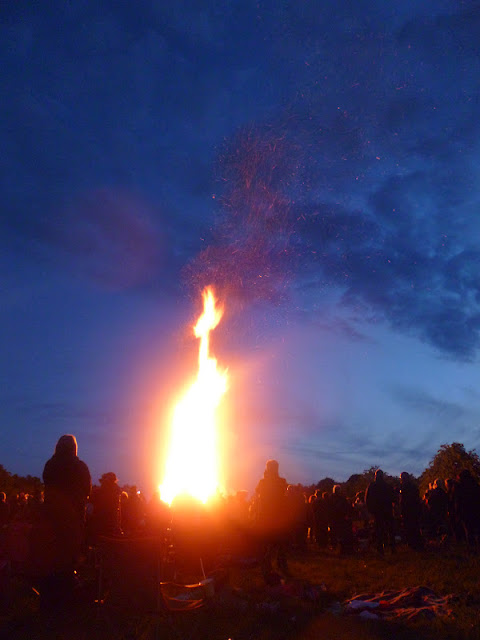 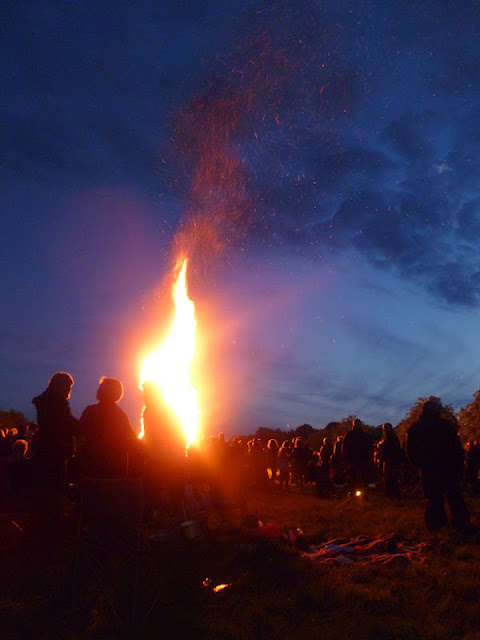 Our guys were ecstatic at seeing the fire and the tall flames. After watching such a beautiful blaze, Dan said he doesn't feel as if our firepit at home really "cuts it" anymore!  Coo woke up and watched it all very coolly, but looked a bit more impressed after she saw a guy doing a dance with fire sticks near the music stage.

Finally, we gathered up our sleepy short ones and journeyed the long, slow walk back to our car.  I think I can safely say that our nine hours at Coughton Court were wonderful, and a great reminder of the Diamond Jubilee festivities, but we will probably never have that same extensive amount of time on a National Trust property again!  Our family membership purchase this year has definitely been worth it.
Posted by Erin at 2:43 pm