When I was twelve, my brother and I travelled to California from the Midwest to visit my grandmother.  We spent two weeks with her; it was probably the most independent venture we'd had up until then. I remember standing in her Californian kitchen spooning persimmon cookie dough onto tins to bake.  Her recipe for these deliciously spicy cookies was one of the first of many of her recipes that I wrote down.  I've made them again and again over the years, but my favourite version contains pumpkin instead of persimmon.  They are little bites of soft, velvety cake that taste like autumn. 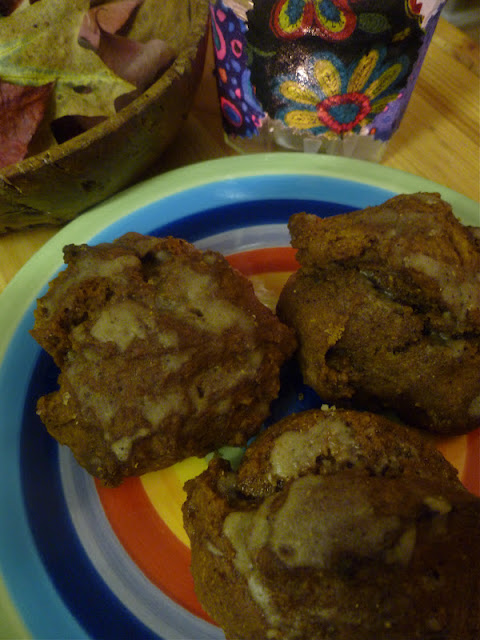 1 cup pumpkin puree
1/2 cup melted butter, coconut oil, or olive oil or a blend of those three
1/2 cup honey or maple syrup or some of each
1 egg
Beat well.  Add one teaspoon of bicarbonate of soda and beat again.
2 cups wholemeal spelt flour
2-4 tsp cinnamon, ground
1/2 tsp cloves, ground
1 tsp ginger, ground
1/2 tsp freshly ground nutmeg
Stir both mixtures together with a wooden spoon.  Either leave as is or add one cup of chopped walnuts or pecans.
Drop by spoonfuls onto baking tins covered with baking paper -- twelve cookies on each tin.
Bake 375F/200C/gas mark 5 for 12-15 minutes.