Bedtime for Frances... a book review

Bread and Jam for Frances, written by Russell Hoban*, has been a longtime family favourite. From childhood I've loved these stories featuring an adorable black and white badger named Frances as the main character.  I've recently added another Frances book to our collection: Bedtime for Frances. 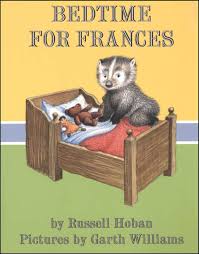 Frances is an incredibly determined and clever little animal.  If you don't pick this up from the storyline, you certainly will when you see her expressive features, beautifully drawn in this first Frances book by Garth Williams.

As Frances goes through her structured bedtime routine with her parents you wonder what's coming.

Her parents deal with this in their own way. I found myself reading quite a bit into their parenting ideas, unfortunately. I say unfortunately because I wish I could just sit and enjoy the gentle, soft illustrations and simple story like my three-year-old does. Instead, I found myself slightly disappointed by Frances' father finally warning his badger daughter that she will receive a spanking** if she doesn't go to bed.

After telling myself to lighten up on the judgment, on a second and third reading I was able to let go of other people's --er, badgers'-- parenting styles and appreciate the book.

At the beginning of the story, Frances kisses her parents goodnight and settles down. She makes up an alphabet song and sings it to herself as she attempts to fall asleep.

But she gets stuck near the end of the song --"T is for tiger, U is for underwear, down in the drier"-- because drier does not rhyme with tiger. At this point Frances stops her song because she is sure she sees a tiger in the corner of her room, and must go tell her parents.  Her father explains that it is a friendly tiger and admonishes her to go back to sleep.

Back in her bed, Frances glimpses a big, dark giant in her room.  She again leaves her room to tell her mother and father, who are having tea and cake and watching television.  She explains about the giant, and her mother refuses Frances' request to watch television, but her father gives her a piece of cake.  After eating the cake, she returns to her room and talks to the "giant", only to discover it is her dressing gown, slouched over a chair.

Once again lying in her bed, Frances' next concern is a large crack in the ceiling above her bed.  Her imagination tells her that "maybe something will come out of that crack".  She finds her father, and brushes her teeth with him, telling him all about her new worry.  He admonishes her to get someone to help her watch it.  Frances enlists her teddy bear to help with this. After a while, Teddy does all the watching because Frances needs to use the bathroom.

She returns from the bathroom to find the curtains at her window being blown about by the wind, necessitating a trip to Mother and Father's room to tell them all about it.  This is my favourite page [and drawing] in the book.  "Frances stood by Father's side of the bed very quietly, right near his head.  She was so quiet that she was the quietest thing in the room.  She was so quiet that Father woke up all of a sudden, with his eyes wide open."  Garth Williams' detailed yet simple illustration makes Father's sleepy, annoyed expression and Frances' sheepish gaze human rather than badger-like.  Father informs Frances that it is the wind's job to move the curtains about.

"I will be out of a job?" is Frances' cheeky guess.  Her next guess is that she will get a spanking.  Her father positively confirms this.  Frances says "good night" and returns to her room speedily.

The solution to Frances' bedtime difficulties is brilliant. Back in bed, she hears a scary noise.  She climbs out of bed to run to her mother and father. At the door, she re-thinks this and decides not to tell them.  She hears the noise again and wonders what it is. Bravely, she stands on her bed and looks at the window, and sees a moth bumping against the glass.

Frances now feels tired and she lies down, closes her eyes, and thinks.

"That is just a moth, and he is only doing his job, the same as the wind... my job is to sleep."  And off to sleep she goes.

All in all, it is a satisfying conclusion to a story that both children and adults will appreciate.  Coo and I read it three times last night and I'm sure we will be reading it again today!

*Writing this review, I was interested to find out that although Russell Hoban was born in the United States, he moved to London in 1969 and spent the remaining forty-two years of his life there.  This certainly explains the subtle English influence in the American-at-first-glance Frances series.

**I'm not intending to open up the debate on spanking. Though we spanked our first two children for a short period of time, we soon ended the practise, mainly because it felt wrong.  The book we read that influenced us in this decision was How to Really Love Your Child, by Ross Campbell.  If you would like to critique our decision not to spank our children, feel free, but please understand that I will not enter into an online debate about it, as I've already stated our reason for not spanking and have no further argument to make on the subject.
Posted by Erin at 5:30 pm