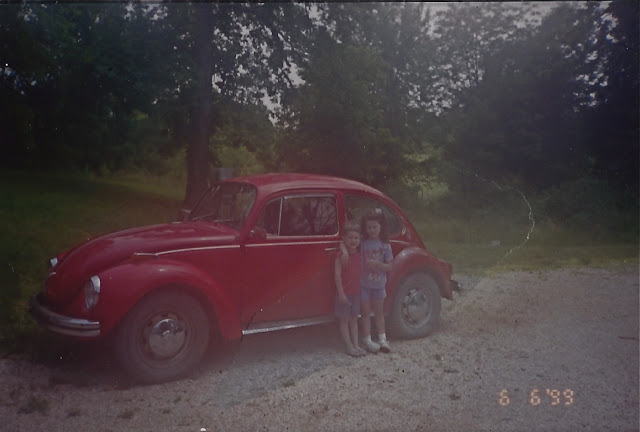 This was my car for two short, happy years.  [Also pictured are my youngest siblings: fourteen and twelve years younger than me, respectively.]

I had wanted a classic VW Beetle ever since my parents sold theirs when I was a young child.  Living back at home after Bible college, I needed a vehicle for work, and as soon as I spotted this red Beetle on a used car lot, I knew it was the one.  My dad and I went to look at it.  "Great job, Erin," he congratulated me.  "You picked the only car on the lot without an engine!"

Fortunately, Dad knew an experienced mechanic who could breathe life back into old VW's.  With a reconstructed engine, my Beetle, new to me, ran reliably and well.  I drove him everywhere: back and forth to the library where I worked part time, to violin lessons half an hour away, and all over the countryside to interviews and meetings as I worked the rest of the time as a junior staff writer for a local newspaper.

He had a real personality. His maximum speed was about 75 mph, but I was proud of him for being able to even reach that!  My brother Alex liked to tease me about my "Nazi car", and advised me to invest in a fireproof suit to wear while driving it.  Various newspaper colleagues also enjoyed giving me a hard time about my "toy car" and thought I drove recklessly in such an unsafe vehicle.  Some of my most fun memories include trying to keep up on the fast lane of a motorway, wind blowing in through the open windows; tires crunching over gravel on country lanes as I searched for addresses of people I was interviewing for the paper; and going on shopping excursions with my sisters.  Even my Beetle's downsides had their funny points. The "defrost" function didn't work, so defrosting the car was basic: a window wide open in the freezing cold as I drove down the road, the tiny heater working hard to warm the car but succeeding only in filling it with the stench of fumes from the engine and burning my middle while my feet froze.  Because the car's fuel gauge didn't register, I had to keep track of my mileage so I would know when to make a trip to the gas station.  I remember running out of gas only once.  And locking the keys in the car --once.  Some things I just don't do twice.

One of my greatest regrets is selling this treasure of a car to the wrong person.  When I was living at home and working before venturing east across the Atlantic, I had written a short feature story about a family-run dairy farm.  The farmer admired my car and said to me, "Let me know when you want to sell it because I'd like to buy it and restore it."

But I didn't.  I returned to the US several years later and my dad asked me to sell my car to avoid the development, as he put it, of a "VW graveyard" on his drive.  I was happy to oblige, but I avoided calling the farmer who'd wanted my car.  A tragedy had just occurred in his family and I was afraid.  Afraid to contact him, afraid to ask him if he wanted the car, afraid to talk to anyone suffering.

A decade later, I can laugh at myself, with a huge sense of repentance that I didn't even try to approach him about my Beetle.  It might have been just what he needed: a project full of hope, helping him walk through grief.  Knowing what I know now after experiencing my own journey through grief and loss, it probably would have been the best thing.

Instead, I watched my car being driven away by a man who handed over eight hundred dollars in a wad of fifty dollar bills.  I had even put the original owner's manual back in the glovebox, as it seemed to belong with the car. The man seemed pleased with the bargain, and I knew he wasn't going to restore my beloved car.  I never saw him again.

I can't help but hope that wherever my 1972 VW baby is, the grass is green underneath him and the sky is blue above as he rusts away in a deserted spot.  I hope he forgives me for not selling him to the right guy.  If I had the chance to do it over, I would!
Posted by Erin at 12:27 pm