Times and things are changing for us and for the people who are close to us this year.  Who are we? Who am I, in the midst of all of this change?  In the leaving behind, I don't want to forget what has gone before, what has surrounded me for the past thirteen years, this culture that once was both alien yet oddly familiar and now is everyday commonplace.  It's been three years since I've returned to the land of my birth. It seems an indistinct and long-ago place of memories and childhood, dreams and the dead.

The now, the everyday me, is predictable and even-keel: dependably so.  I learned quickly and quietly, so many years ago now, alone.  I learned to follow the masses, stand in the queues, and read the signs. So many signs.  Fond appreciation of rain ceased after a few years; I learned to tolerate it as everyone else does and talk about the weather. To small-talk, understand roundabouts [both in driving and in conversations], and have incessant hot drinks to keep myself warm. To watch and listen carefully without arguing my point too strongly, to translate the Anglo differences in words into American in my head, then back again and again, until they muddled into nothing but Anglo.

I learned the place names, regions, and geographical accents of this place. I learned to understand and appreciate British humour --and the sarcasm so beloved of some members of my family has meshed into this Anglo comedy and become my own. I have a British passport and a basic understanding of the tricky cultural situation in this country.  I appreciate the blandness of the British political system in contrast with the near-religious fervour of the American political structure. I know the meaning of the word chav and see the reality of it in every walk to town, and its utter incongruity to the world's view of quaint English behaviour.

I feel the tragedy of nearly twenty thousand lives lost in London --and over twenty thousand more elsewhere in the UK during the Second World War-- and wonder sometimes why all I ever really knew about death during WWII [aside from the Holocaust] was limited to Pearl Harbour, when in this country countless families had already borne the cost of Hitler's spiteful vendetta against Britain and buried their dead by the time our two thousand and a half died in Japan's surprise attack.  It's as if the near-romanticism of Hawaii's suffering soldiers was somehow more worthy than the grim everyday reality of London's tragedy of mothers, fathers, and children dying under bombed rubble and burned-out buildings as their lives and history disappeared before their eyes.

I have compromised silently or laughed apologetically while listening to racist snarks about Americans: usually mild but if "Asian" were substituted for "American", well then it would be "real" racism. I've heard the phrase "That's so American" said contemptuously in a tone more bitter than observational more times than I would care to count.

I have laughed into my sleeve whenever one of my own oddities has been dismissed as "so American" all the while knowing the quirk was entirely my own.

I have eaten obligatory fish and chip meals when other Americans have visited, and have taken them on trips to castles and country homes and "quaint liddle villages".

Underneath this British waterproof of cultural behaviour is me: a somehow-not-quite-American.

Genetically I am from far, faraway.

From Frances Marion Frederick, who fought too young in the American Civil War. From Samuel Gardiner, the first white child born in his pioneering family's newly founded county. From the unnamed Native women in our family who were shamed into mythological obscurity.  From my great-great-grandmothers who made new homes in rugged places, sewed clothing and quilts by hand, made their own soap, and chose to remember so little about their European forebears that the truth of their origins blended into folklore.

I am from my grandfather's mother's Polish family who chose to emigrate to a new country rather than send their sons to war.  From my grandmother's family who originated in Yorkshire, once upon a time, yet still remembered how to cook a proper English roast dinner with homemade Yorkshire puddings.

I am from my mother's father, who sailed the seas during the second world war and saw the handful of survivors from the USS Indianapolis, the Navy cruiser torpedoed in the Pacific by the Japanese after delivering crucial atomic bomb components. He went home to become a teacher, married my grandmother, had three children, and after a life of creativity and adventure sits at home alone in Southern California remembering.

I am from my father's father, who spent second world wartime in Okinawa and like a typical boy, came home with Japanese bayonets and other various collected now-rare weaponry. He returned home to farm and barber and have children and live quietly, watching the weather and walking through the woods and making us all appreciate dry humour and dying at home in bed in the same room where he took his first breath.

I am from my paternal grandma who was known to carry a gun in her handbag, and my maternal grandmother who took my brother and I along to a world peace vigil.

Upon returning to their land, the place where I was born and lived unbroken for the first seventeen years of my life, I must step cautiously, listen carefully, learn the culture all over again.  Live with my social mis-steps because my brain is more Anglo these days, and slowly remove my British waterproof, replacing it with, oh, I don't know --a hand-knit sweater [Br. jumper] made by me-- just for me. 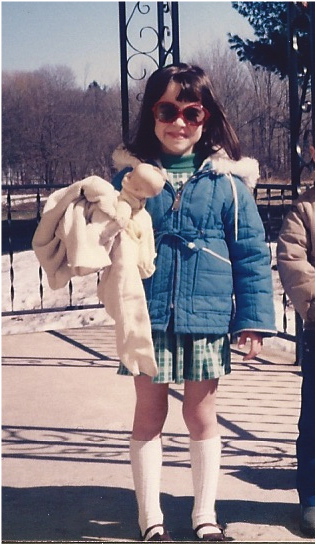