Today was going-home day for my visiting American family members, and going-to-London day for Coo and me. We caught an early train and arrived in our capital city at quarter past seven this morning.

Thankfully, London hasn't had the same snow we've experienced, so instead of trudging through snow, we were able to get around quite quickly and easily. Coo rode on my back in the mei tai for the first few hours and then opted to walk.  First, we gained our bearings and figured out where we needed to be for the demonstration. After that it was only 9am, according to Big Ben, so we ended up at Whole Foods in Piccadilly Circus, with coffee for me and a bagel for Coo. 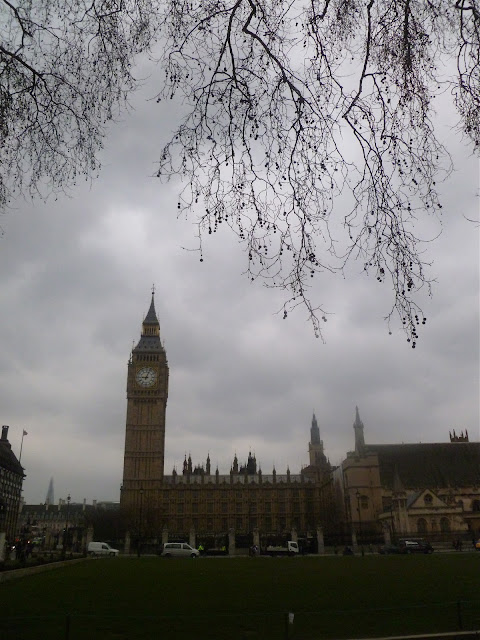 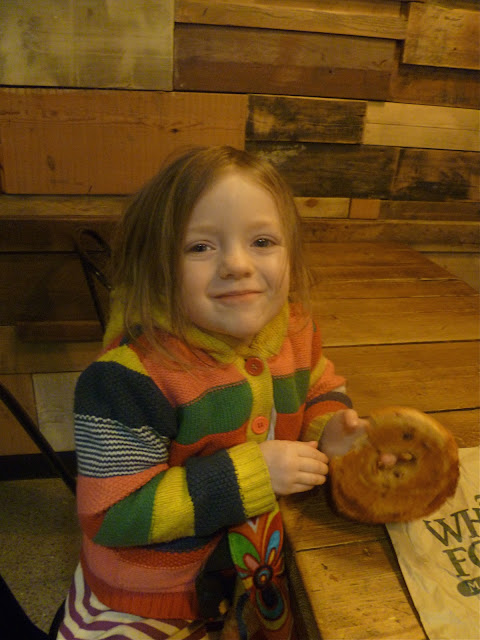 A few weeks ago, I wrote about the need for freedom in being able to choose how we give birth.  In the UK, all midwives are trained professionals with the same qualifications, and members of the Royal College of Midwives union.  Currently, midwives who are practising independently of NHS trusts do not possess professional indemnity insurance and cannot offer an insured birth to their clients.  Midwives practising within an NHS trust are automatically insured by their trust.  In October, new EU guidelines will outlaw any practise by professionals who do not have PI insurance. As you can see, in a roundabout way this also effectively outlaws independent midwifery. Independent midwives in this country are trying to encourage the UK government to assist them in finding an affordable solution for their need for PI insurance, without forcing them to work for NHS trusts and ending their independent status. If guidelines change in October, insurance companies are the ones who will begin dictating midwifery practise, similar to the way their chokehold on the medical industry in the States also controls birth practise there. Seriously... insurance companies controlling our birth choices?!

Why do we have a need for independent midwives as well as NHS midwives, if both receive the same training? NHS midwives do their best, working within a system of often restrictive policies and protocols. I had two NHS births, both with wonderful midwives. Apart from one midwife with Coo, I had never met any of the midwives who were with me during those deliveries, until I went into labour.

However with Mr J's birth, my independent midwife, Sarah Montagu, was the only medical professional I saw during my entire pregnancy.  I cannot stress how important it was for me to have the continuity of the same midwife throughout my pregnancy, who then was with me when I delivered Mr J --my first home birth.  I knew her well by then, and if she had told me I needed to transfer to the hospital I would have trusted her enough to go!

There were a few hundred of us, all standing outside the Houses of Parliament.  Described by some media sources as a "protest by independent midwives", the group was actually very diverse. Doulas and families who've used independent midwifery services were also there, as were midwives who work for NHS trusts.  Representatives from the Royal College of Midwives, The National Childbirth Trust, and other organisations supporting our right to choose our midwife joined in also.  [My three boys were impressed to hear that England footballer Theo Walcott's mother was there!]

We stood outside Westminster for some time, then walked down the road to Downing Street, where a petition was ceremoniously delivered. 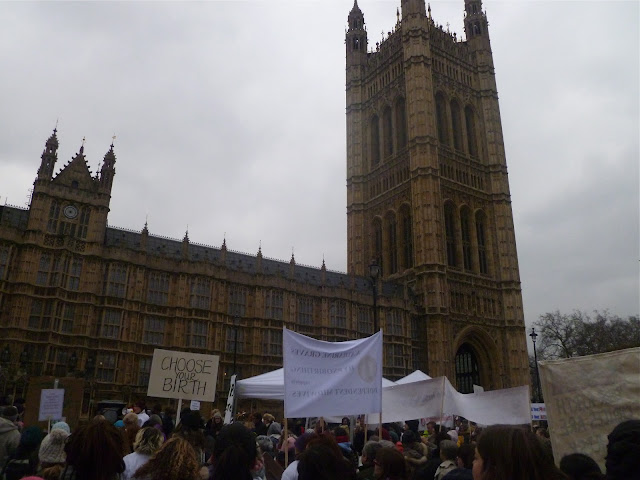 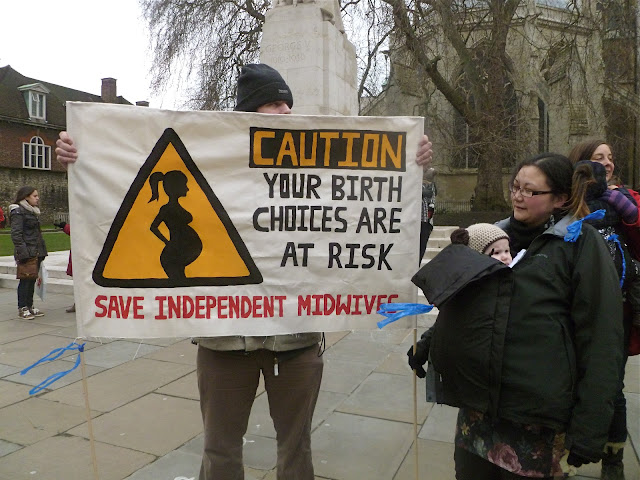 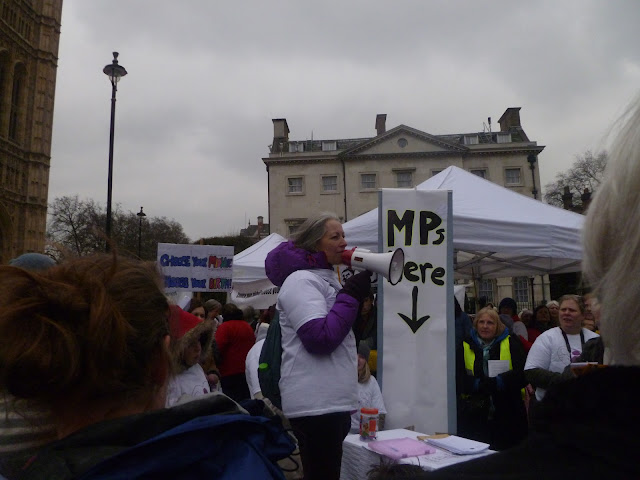 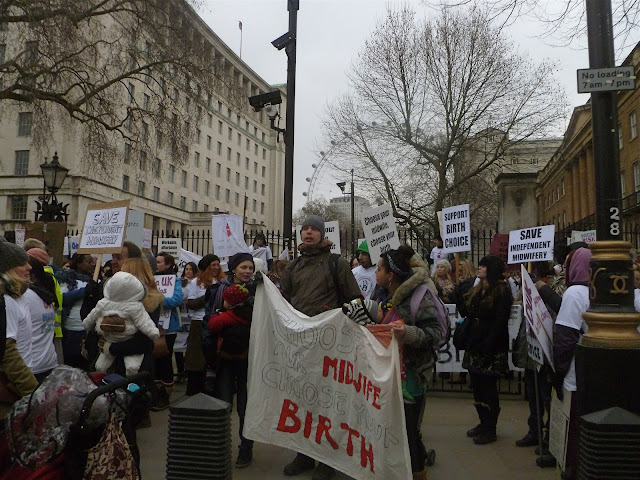 Coo and I spent the afternoon at Whole Foods in Piccadilly Circus.  We had hot drinks with our new friend Karen and her little boy Rohan. Later, after Karen and Rohan had gone to catch their train home, Coo and I chose an early tea from the huge selection at Whole Foods and munched away on lovely healthy food [mostly --Coo did have some cake!]

Then we made our way back to Euston station and waited for three hours for our train home to the Midlands. Afterwards, I calculated that the money we saved by buying the cheaper, later train ticket was easily spent on extra cups of coffee for me and a biscuit for Coo during the wait! Never mind.  Coo and I had fun, making blanket dens in the station, colouring, writing, and later on the train --colouring more.  Finally, not far from home, Coo fell asleep after her fifteen-hour day!  She did so well, climbing stairs and riding up the tall steep escalators of the London Underground, not flinching once when the fast underground trains roared past us.  She walked as much as she could and didn't constantly ask to be carried.

I'm so thankful for my little girl, and she's one of the reasons why we were in London today.  I want her to have the option to choose an independent midwife someday, too. 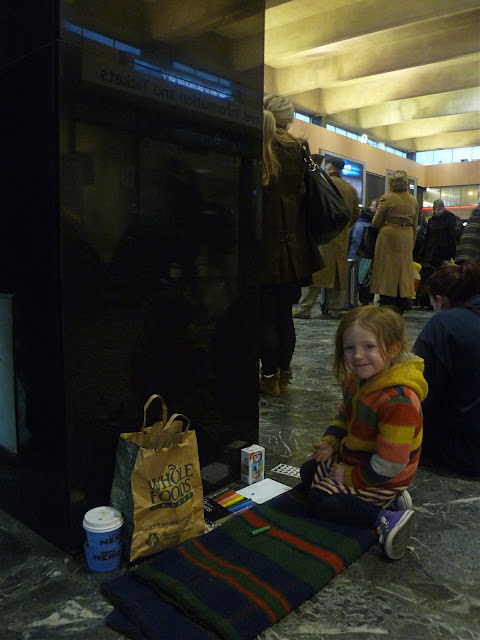 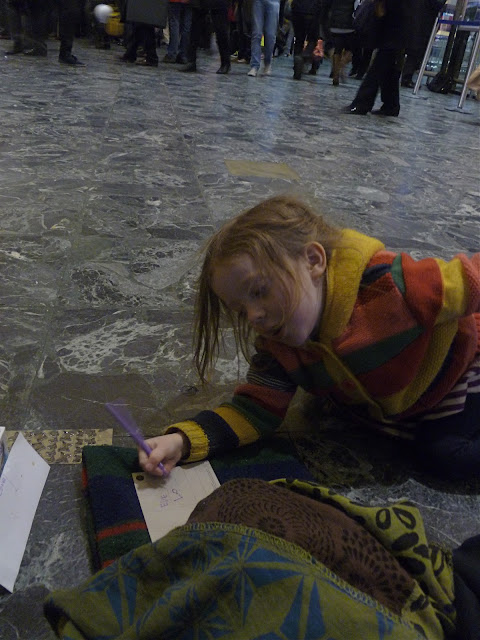 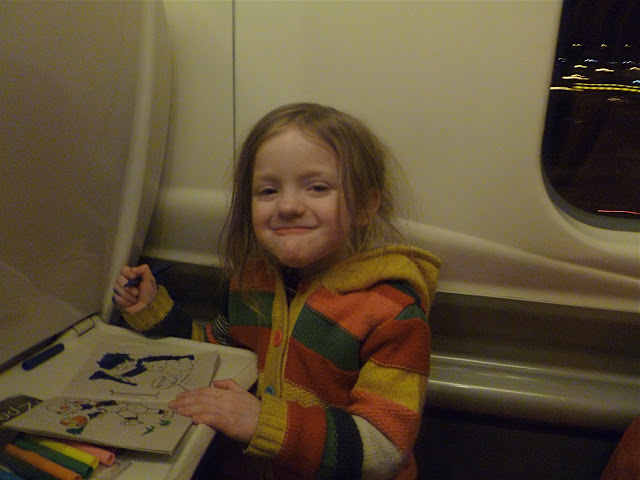 Please visit HERE and sign the e-petition to save independent midwifery!

For those of you who are trying to understand the insurance conundrum, here's a statement from the Independent Midwives UK website: "Currently there is no professional indemnity insurance available to independent midwives, which means we are personally liable for any negligence claim made against us. Some commercial cover was available until 2002 but the premiums kept escalating, despite an excellent claims history, until an annual premium was around 20,000 [English pounds] per midwife. As this was more than many independent midwives earned, most were forced to make the difficult decision to cease practicing or practice uninsured. There is no insurance available to either independent or employed midwives that will pay out if 'things go wrong'. Insurance is there if medical negligence is proved against a practitioner having or not having insurance does not mean that your care is any safer. IMUK is campaigning to ask the government to find a workable and affordable solution."
Posted by Erin at 11:30 pm