The entire purpose of this trip was to renew Lefty and Righty's American passports.  Each time one of our American passports needs renewal [every five years for under-16s] we make an almost ritualistic trip to the American Embassy in London.  We've also visited the embassy to register our children's births as American citizens born abroad, collect my American passport [lost by Royal Mail], pick up emergency passports, and most recently, Dan had his visa interview there. We've counted eleven trips so far, but this is definitely the last one to the embassy in Grosvenor Square.  We're leaving, obviously, and in 2017 they're packing up and moving to the new embassy building in Wandsworth. Judging from the design --the new building looks like a silver ice cube with giant hairpins sticking out of it-- I'm sure the security there will be boundlessly adequate. And to think we just walked in off the street when we went to register Lefty and Righty's births back in 2002!

Over the last two days, I've been reliving our last trip to renew these guys' passports.  They were five and a half, and Mr J was two.  We visited the Natural History Museum and enjoyed the dinosaur and earthquake exhibits, had bread and homemade stew for tea from our food thermos, and stayed in a hotel that hadn't been decorated since the 1970s. Mr J stuck his finger in an electrical outlet the next morning before our appointment at the embassy and fussed the entire time we stood in the security queue because he thought we were taking him to the hospital over his sore finger. He'd had two ambulance trips already that year [it was only March]; but that's a story for another post.

We stayed at a "boutique hostel" in Willesden Green this time.  It lacked the silence, retro decor, and fabric-covered mattresses --probably bedbug infested-- of our 2008 hotel. [Have you ever slept on a laminated mattress? My advice: don't. It's rather sweaty.]

However, the hostel was full of European tourists, mostly under the age of 25, so the atmosphere was noisy and friendly, and we definitely helped liven it up with our crew.

Not long after arriving on Thursday afternoon, we took the Tube to the Science Museum.  Dan, Lefty, and Righty came here for a Christmas trip one year and they were looking forward to showing us some of their favourite things.  We saw a piece of the Moon, which has never been in contact with the Earth's atmosphere, permanently preserved in liquid nitrogen.  We viewed an exhibit on the history of flight, complete with remnants of flying apparatus and machines dating back a few centuries.  The kids played for a long time in "Launchpad", an interactive gallery. 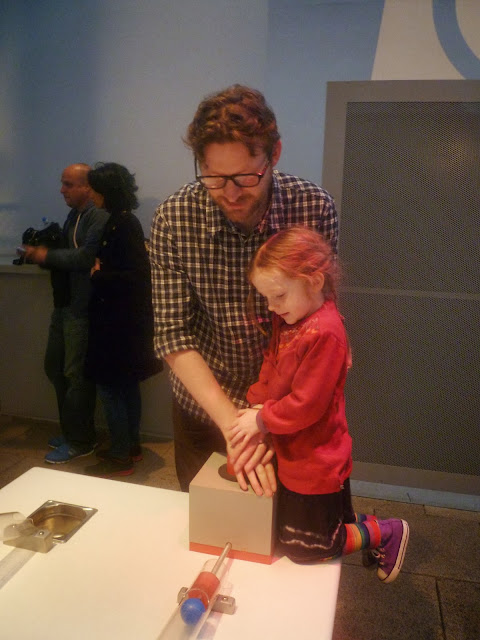 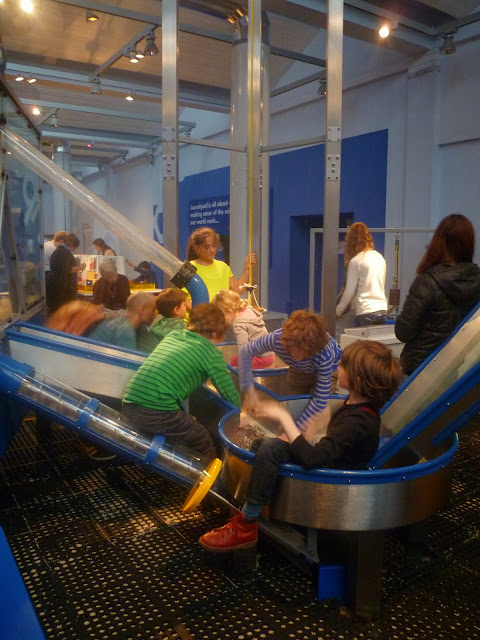 Remembering the fun of the roaring mechanical dinosaurs and the "earthquake room" that really shook, we decided to move on to the Natural History Museum, which is right next door to the Science Museum.  However, both exhibits were closed for maintenance.  Disappointed, we decided to carry on, to our doom. 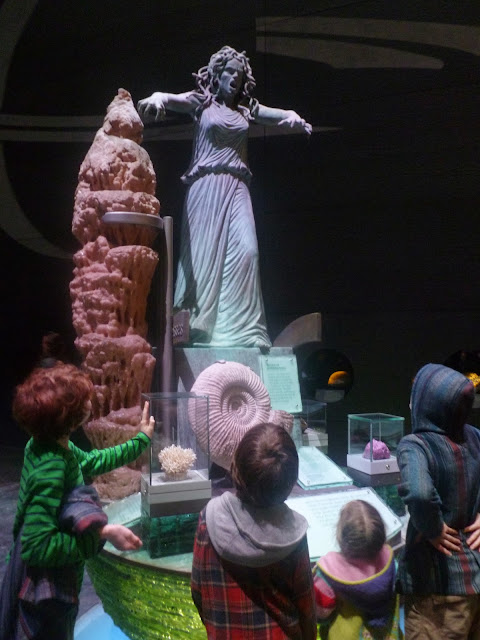 As we rode up the majestic escalator into the giant Earth sculpture to reach the first floor, Coo's tiny foot somehow became trapped between the moving step and the side of the escalator.  After lots of shouting on our part, we managed to get the attention of someone below, who stopped the escalator.  Dan held her while a helpful bystander and a designated First-Aider worked to free her foot. It was twisted at an odd angle, and though my memory of the experience is a blur, I remember thinking that we were definitely going to be making a trip to the hospital.  The three boys were terrified --mostly because Dan and I had shouted, but also because their little sister is their treasure.  She went off, carried by Dan, to have her foot examined once it was free.

To our surprise, they both joined us not long after.  Apart from a small bruise below her toes, she was fine.  I guess it pays to have her bendy foot joints; her little foot twisted quite far but not far enough to cause a sprain or a break.

Everyone was ready to call it a day after this, so we headed back to the hostel, via a long walk through Hyde Park where we saw a heron and herds of tame ducks, geese, and swans. 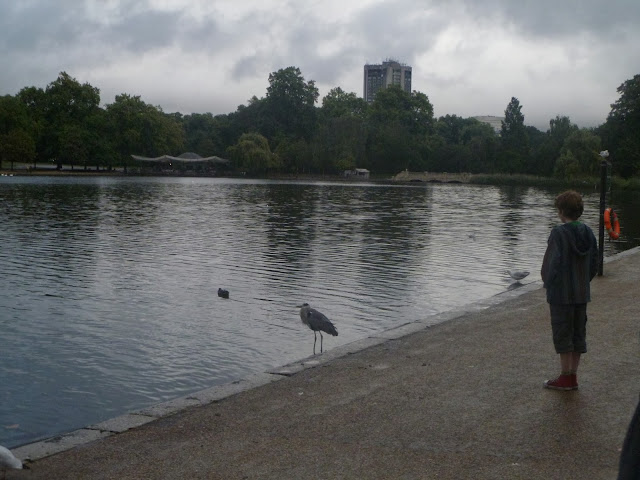 Another visitor to the Park shared bread with the kids so they could feed the birds, who were clearly accustomed to being fed by the public. 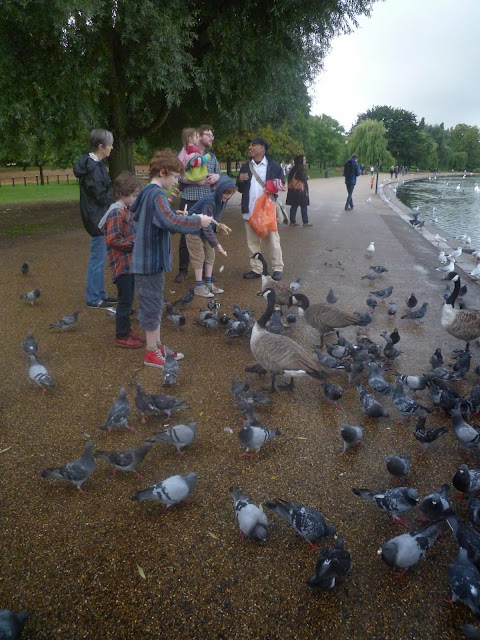 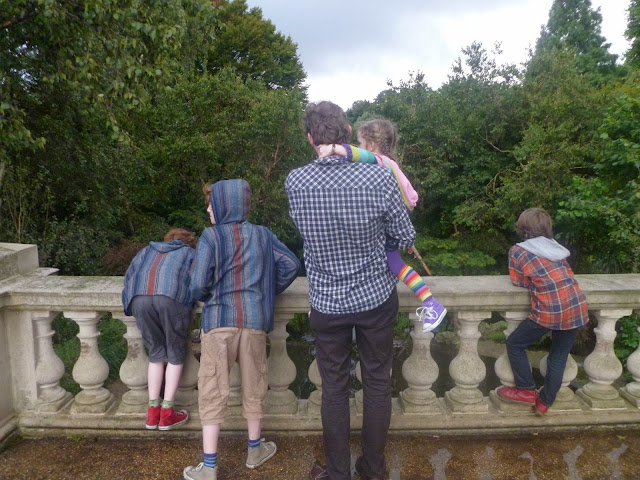 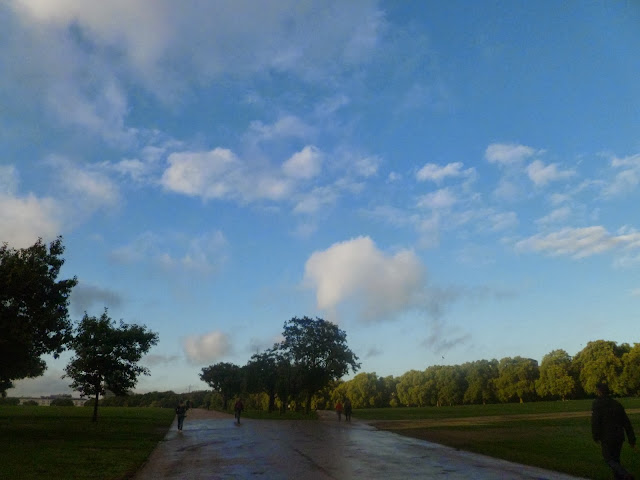 We put together a tea of beans on toast with rocket salad, and I chatted with other hostel residents while preparing food in the communal kitchen.

We had an early start and were downstairs munching through breakfast by 7.45.  The boys enjoyed the free juice, unlimited toast and cereal, and jam packets. Yes... my kids eat jam from their tiny single-serving packets with a spoon. I guess it's too hard to spread it on the toast.

Our embassy appointment was mid-morning, and the sun was out, so we had a lovely, stress-free journey into the centre of London.

We negotiated the passport process at the embassy and went for lunch at Whole Foods in Picadilly.

Post-lunch, we spent the remaining hours of the afternoon in the British Museum.  Coo fell asleep in the mei-tai on my back, so missed everything! 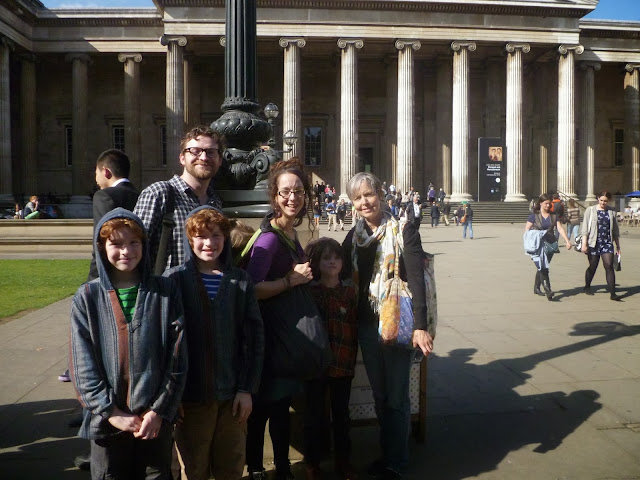 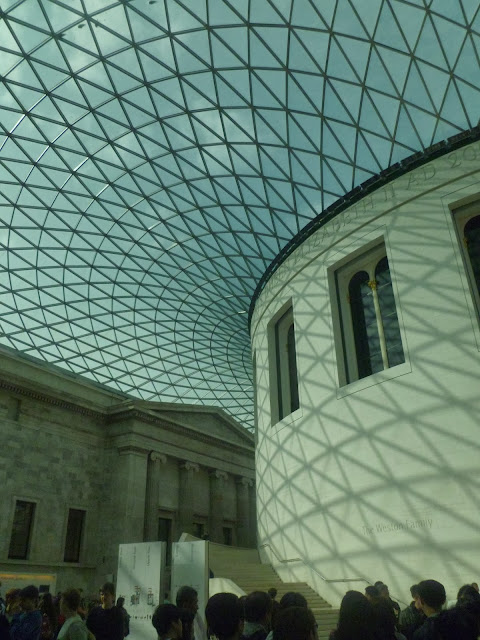 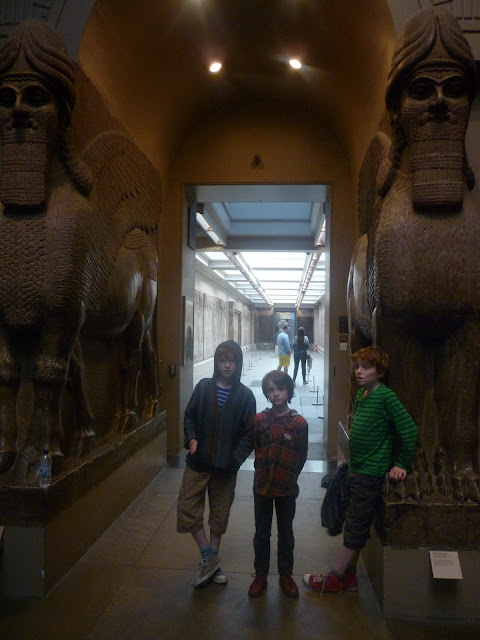 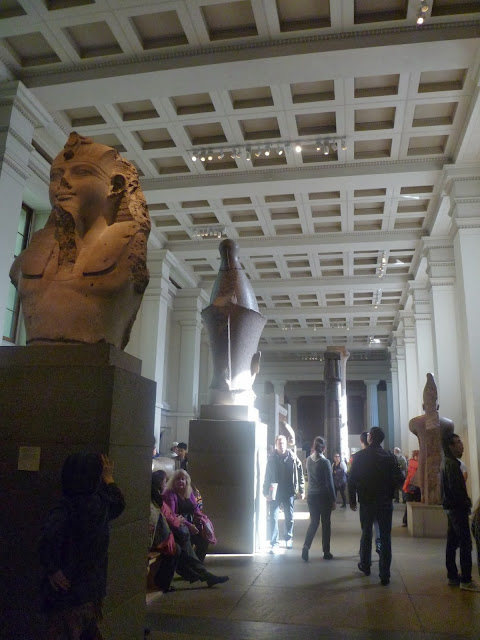 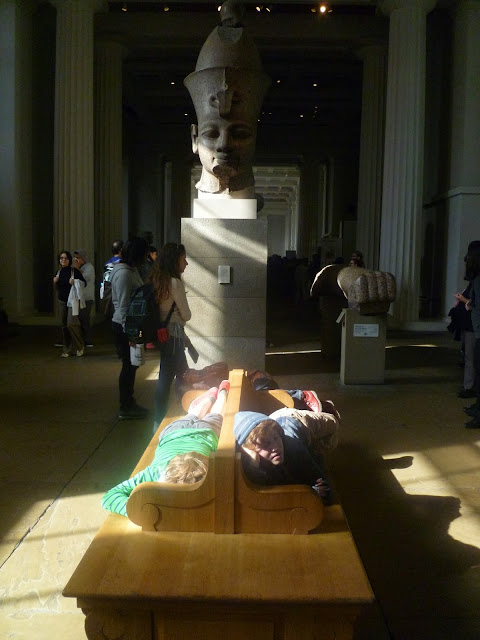 We saw the Rosetta Stone, of course, and the Ancient Egyptian rooms, and four out of five portions of the Middle East exhibits, all Assyrian.  Coo woke up as we were leaving, just in time to catch a glimpse of the Rosetta Stone. Mr J was relieved; he had been disturbed that she was missing it!  My mother figured out that we saw about one-twentieth of the museum, in the three hours we spent there.  I think a week would have been more sufficient in order to fully appreciate the treasure trove of artefacts and history contained within this palatial space.

The three boys were totally exhausted inside the museum; however, back on the Tube they were rejuvenated enough to work out as the train sped through the Underground. 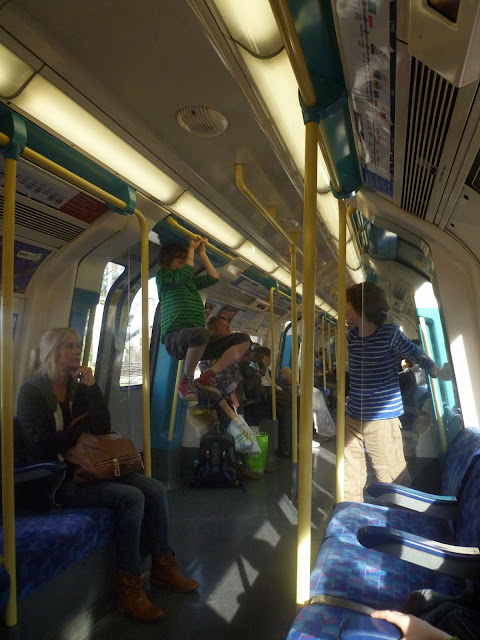 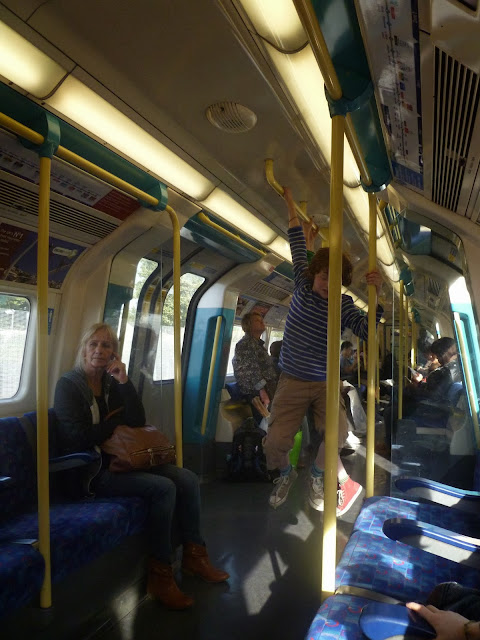 We returned to Roosevelt, and then Dan negotiated rush-hour London traffic all the way east to Shoreditch, so Mom, Coo and I could investigate the People Tree sample sale.  Dan and the lads stayed in the car and watched east London Friday night wildlife; apparently Shoreditch is the new Camden: a hipster's paradise.

Driving home to the Midlands, all was going well until we were stopped in a traffic quagmire not twelve miles from home.  As four lines attempted to merge into one, we travelled three miles in the space of an hour!  All seven of us were so relieved to step through the door at home, no matter that it was much later than we'd intended.

Today, all four children have played quietly, subdued by their hectic travels.

I like London, and have many happy memories of times spent there with family and friends --not just at the American Embassy!  It is diverse, fun, and full of all the things I love: quirky small shops, healthy restaurants and Whole Foods, theatres, enormous bookshops, super-easy Tube travel, never a dull moment.

Yet Edinburgh still is, and always will be, my favourite.