My husband and I took Mr J out last Saturday to see a children's play, "Going on a Bear Hunt".  This was his second annual Christmas trip, for which he had been counting down the days.
He was in a state of silent excitement as we took our seats in a venue crammed with other small people and their adults.  The lights went low, the murmuring quieted and four grown-ups burst onto the stage: "Dad", "The Children", and  "The Dog".  The Dog was most interesting in that he was entirely capable of playing several musical instruments and he kept up a live soundtrack during the entire performance!  Many of you are probably familiar with the classic Bear Hunt children's story, and the play ran true to the book, simply playing out the various scenarios with lots of interactive fun.  In the final scenes, the bear raced after the other characters, and the play ended with the same fun energy with which it began.
And it was fun.  Not just for the children, but for all of us adults, too!  It was fun to see and absorb the enjoyment of the children around us.  It was fun to watch Mr J's face light up when he saw the bear for the first time, a non-scary animal of the giant teddy variety.
Afterwards, we walked along the canal and Mr J peeked in the windows of a floating coffee shop on the water, staring at the coffee drinkers inside.  We went up and down escalators with him; yes, I suppose that classifies as "playing on the escalators" - oops!  We sat at a table for three and enjoyed lunch together at a restaurant.  Mr J's fun became my fun, and Daddy's fun.
I want to make sure that happens more.  Sometimes, I know I unintentionally reserve fun for the special occasions: the birthdays and Christmas trips and holiday times, instead of letting it be a part of my everyday life.
I'd like to be more intentional with fun this year.  I'd like to plan more fun trips and days, and just have more fun, in general, as a family.  I'd like to have more fun with my kids!  I don't want them to only remember me as the person who was in the kitchen all the time, or the mama who encouraged them to work, read, and tidy.  I'd also like for them to remember the times when mama really forgot she was an adult for a while and had fun with them.
And in order for those memories to happen, I have to be intentional about it, choose to forget all the grown-up stuff for a while, and just have fun like the kids! 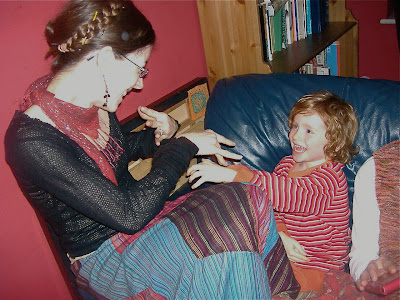