"Pappy" was my grandpa's nickname.  He passed away last August at the age of 84, so we chose to commemorate his 85th birthday with a memory day, using this as an opportunity to honour his life by celebrating, instead of mourning. 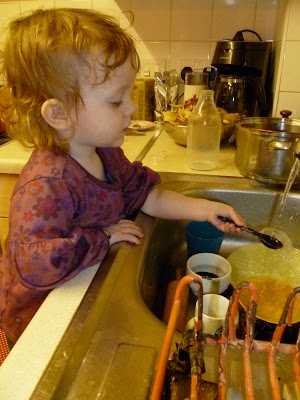 Coo was on pre-tea washing up duty. 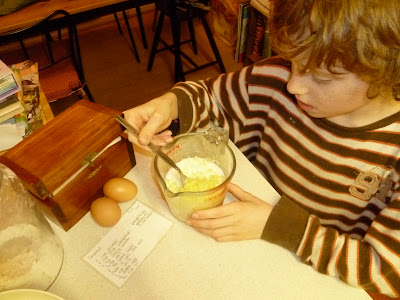 Righty remembers making cornbread with Pappy on several occasions, so he made some today.
The recipe box on the left was crafted by my grandpa, from sweet-smelling cedar wood. 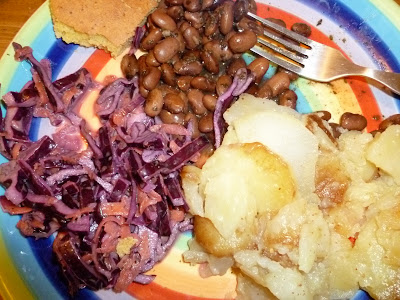 Our meal was one I've often eaten at my grandparents.
Minus the German sausages and with red cabbage coleslaw instead of their sauerkraut! 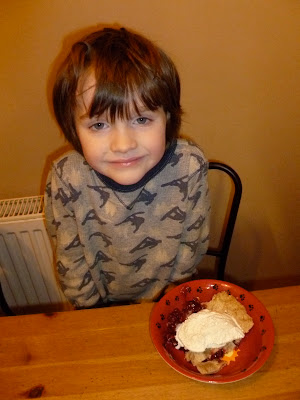 Mr J had been excited all day about his first ever taste of homemade cherry pie with cold vanilla ice cream.  He wasn't disappointed, and savoured every mouthful! 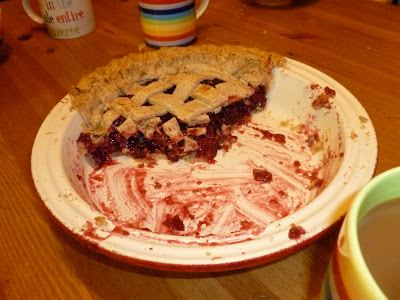 As did we all.  Not much left here.
Before we devoured the pie, we spent some time talking about our memories of Pappy.  I scribbled the memories in my journal as each person spoke.

Pappy was the oldest person I knew.  I remember going to Pappy's house.  I saw some real life deer.  I liked the singing things. [My grandma's musical monkeys - stuffed animals!] -Mr J


As I was making a cherry pie for today, I was thinking about how I baked a spice cake from scratch on our visit to the States nearly three years ago.  I took a slice to Pappy because I knew it was one of his favourite cakes.  I remember him saying, "That tastes just like my mom's! Just like it!" He was always very complimentary of any homemade baked goodness from his granddaughters, but this had clearly connected to a deep memory for him, remembering the taste of his long-gone mother's homemade spice cake.  -The Mama


I'll let Dan have the last word.  As usual, he's done an excellent job of summing up just what my grandpa was like.

Pappy was a very warm person.  I always remember him greeting me with, "Well hello, Dan!"  He made the most amazing breakfasts - the kind of breakfast that a "Full English Breakfast" always wished it could be. He'd always make sure I had plenty of food on my plate at mealtimes!


Pappy would have been 75 the first time I met him, ten years back. For a 75 year old guy, he was no slouch. In fact, I distinctly remember feeling slightly in awe of this man that was supposed to be old, but somehow wasn't so. He had a vitality that belied his years, and even when his body seemed to be trying to help him realise his age, his hard-working character told his body to get back in line and do as told. There was something inspirational about that - it made me want to learn to discipline myself to work hard in the same way, to still be firing on all cylinders long after society thinks I should be in the retirement home...


He also took really good care of Grandma, always speaking of her with respect and love. The language he used when referring to her in any context left you with the impression that his love for his wife had never diminished, never skipped a beat, but in fact had been refined and deepened with the years given to him.


I remember some of our earliest conversations. He made a real effort to connect, asking questions about life in England, and sharing his experiences with me. His knowledge of the world really impressed me. For a man who'd spent most of his life in Southern Indiana, you got this feeling that Pappy knew a awful lot about the world. Anything you could care to mention, he had an experience  that could relate to it, and often deliver a bucket of good old wisdom to boot. I loved how he would sum up a story he told with a simple statement, usually reflecting his good old fashioned values and principles, the kind that the world would do well to remember as well as he did.


On our most recent trip to the States, I had the opportunity to spend an afternoon with him. It wasn't planned, but a chat with Pappy was often one of the highlights of visiting Indiana, and looking back, I am so thankful for that day. His humour was in fine form, those subtle, under the breath, one liners. His care for his family evident in the constant checks on Grandma, the questions for me about how his granddaughter and great grandchildren were being looked after. The conversation drifted over a peaceful couple of hours. My experience of spending time with Pappy will last all the days of my life.