Reminiscing for the Future

This was our first Grandmother Day.  Surreal in some ways, I somehow feel as if I should be more sad than I am!  However, knowing Grandmother, she would rather we be constructively remembering her rather than sitting around with our feelings in an emotional dump.

So we were practical in our remembrance, sitting together around the table talking on this day which would have been her eighty-third birthday and scribbling down memories in our book...

Righty: We were at Grandmother's house, about to leave, and she gave us each two chocolates [Hershey's kisses] and said; "Don't tell Sean [my sister's son] that you ate his chocolates!"  Her voice sounded a bit like Grammy's, just older.

Lefty: Grandmother was always very busy, doing little jobs while she talked to people.  I remember playing this game at her house, with these plastic fish in a tub that went round and round and you had to fish them out with a little plastic fishing pole.  Grandmother always had chocolates for us before we left her house.  She liked to play cards with us.

Mr J: I remember playing Busy Bee [card game] with Grandmother.  I like playing on her plastic Jeep.

[anyone else notice how my kids use the adjective "plastic" a lot?!]

Dan:  I was thinking about my first memories of Grandmother, and recall being amazed at all the Spanish she could speak.  I remember her saying, "Vaya con Dios!" when I was about to return to the UK after my first trip to the States.  I only knew what it meant ["Go with God!"] from hearing it on a movie!  Also, she was so organised.  It was impressive; very minimalistic, and everything [in her house] had its place, and an order.  I really respected her because she was someone who had decided to live a certain way and stayed with that decision.  I would like to live out my values in that way!  Grandmother's alternative vegetarian Christmas dinners, like Chinese takeaway and nut roast, were a new thing for me.

Erin: One of my first memories of Grandmother is actually one of my first memories.  I was looking out the window at the car park of the church that was beside our house.  There were lots of people on the car park sitting in rocking chairs, doing some type of fund-raising event.  Grandmother was sewing a dress for me and she asked me to try it on.  I want to say the fabric had strawberries on it, but I'm not sure if it did; it might have just looked like strawberries. Another early memory is of sitting in the basement of our house with her very late one night in Springfield, Missouri.  She lived with us at the time, and Mom and Dad were out for the evening.  I could hear tornado sirens but had no idea what was going on and wasn't scared at all.  There was a thunderstorm going on outdoors and I could see occasional flashes of lightning through the tiny window.  Grandmother, of course, was [outwardly] perfectly calm. [Springfield is just miles from Joplin, Miss., which was devastated by an F5 tornado in spring 2011.]

Grandmother loved delicious, carefully prepared food; and she gave me the recipe for the light lemon pudding cakes that I made tonight for our dinner.  Here is the recipe: 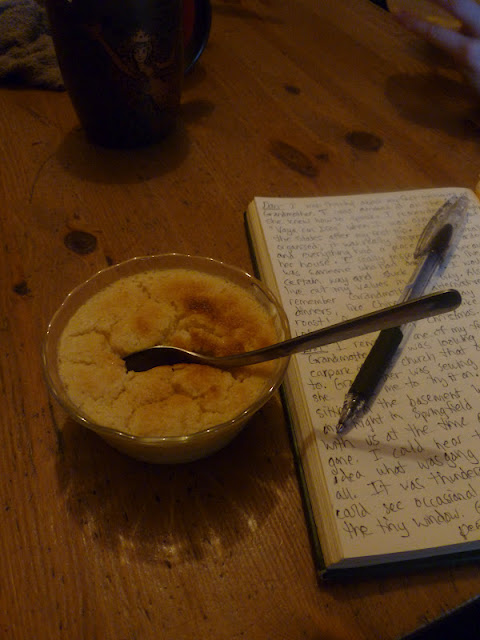 Last week, on the 23rd of April, we also enjoyed our first special day of remembering my dad's mother, on what would have been her eighty-second birthday.  We ate potato soup [one of the things she liked] and homemade chocolate chip cookies, though I don't think she would have made hers with wholemeal spelt flour!  We didn't have a chance to write down memories; Dan was ill last week and there was quite a lot going on.  So we took the time tonight instead.

Lefty: I helped Grandma Dot pull the green tops off strawberries in a big pan.  She had white hair and she always wore a pink thing [apron].

Righty: We went for breakfast once and Grandma Dot was offering her doughnut to us, but Pappy told her she needed to eat it instead!  She always had lots of treats sitting around in her kitchen, like doughnuts.

Mr J:  Grandma Dot had singing toy monkeys.  I went to breakfast at her house before we left to come home.  [Here Righty interjected, "The monkeys sang a banana song, and the monkeys that were together sang a marriage song."]

Erin:  I remember walking around Grandma Dot's yard with her when I was very little.  She liked to show me the flowers, and we always looked at the purple violets that grew in the grass under a tree in the corner of the yard.  [This tree was later violently struck by lightning and destroyed in a terrific storm.]  She would hang her washing up on a line to dry and it smelled good.  I didn't know anyone who did that; everyone else had electric clothes dryers.

Dan:  She never seemed quite confident in herself and as a result, I think, was very, very polite.  She'd always ask carefully before giving the kids any food or treats.  Two minutes in a conversation wouldn't go by without her offering drinks, snacks, or food.  She'd attach herself to a conversation and add little interesting bits and pieces as we talked.  I remember her saying a lot about other people.  She always had a lot of good things to say about her grandkids; she was very positive about them and you could tell she was proud of them.  I think she really enjoyed having granddaughters, in particular.

I hope we continue this practice of remembering my grandparents for many years to come! I have a wealth of memories to share with Dan and the kids in the future.  So we will eventually bring out photos as we talk, and re-read past shared memories together.  This will help Coo, who out of all the children, will not be able to recall her maternal great-grandparents.
Posted by Erin at 9:25 pm