This National Trust property is probably the closest one to us in terms of distance, and we've been intending to visit it for ages yet kept putting it off in favour of more faraway places. But the story wrapped up in this Tudor home, hidden under its layers of Victorian brick cladding, is one of the most exciting and adventurous ones we've heard yet.

In our history studies earlier this year, we learned about the English Civil War, and how King Charles  II was defeated at the Battle of Worcester in 1651. Afterwards, he and many of his Catholic supporters were on the run from Cromwell's Protestant Roundheads.  If any of you are unfamiliar with this story, let me clarify that it has much less to do with religion than it does politics!

Living in Moseley Old Hall was just one of these Catholic families who wished to see the return of the monarchy.  Wealthy tradesmen, they had a chapel disguised as a store-room in their attic, a family tutor living with them who was actually their Catholic priest, and a priest hole so well hidden that it was one of only nine in the country that were not discovered until their necessity had long since passed.

While plans for Charles' escape from England were being hastily finalised, he stayed at Moseley Old Hall and spent a cramped few hours crouching in the priest hole while Cromwell's soldiers searched the nearby wood for him.  Of course, as history tells us, he escaped, went to Europe, mustered a larger force of supporters, and eventually returned as the recognised King of England after the abolishment of Cromwell's attempt to get rid of the monarchy.

During this house tour, led by another inimitable and well-informed National Trust volunteer, our kids were spell-bound from the instant we walked in, opening the same wooden door Charles did when he entered the hall in 1651. Sometimes they can tend to become restless and tired during these guided tours, though such tours are often the best way to have a quick overview of the history of the places we're visiting. However, today they only grew impatient in the last ten minutes, after they'd spotted the knot garden outside and wanted to explore it. Sadly, the knot garden was too fragile for us to be allowed to walk about in it, and they had to content themselves with running around the perimeter instead of climbing inside. But we did get a photo.  Doesn't it look tempting? 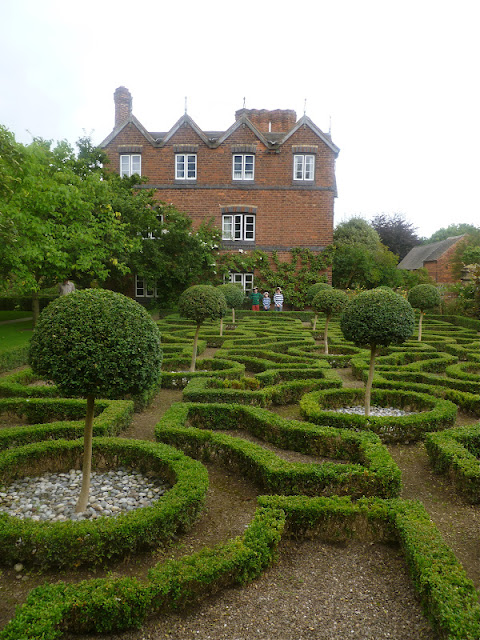 We found leafy arbored tunnels to run through instead, and then a short woodland walk complete with dens and fun hiding places.

It was when walking through the wood that I realised that Moseley Old Hall reminded me of a place.  Maybe it was the wooden Tudor indoor structure, or the denseness of the greenery clustering around the hall.  Or even merely the greyness of the day, interspersed with light rain showers.

"The manor-house of Ferndean was a building of considerable antiquity, moderate size, and no architectural pretensions, deep buried in a wood... Even when within a very short distance of the manor-house, you could see nothing of it; so thick and dark grew the timber of the gloomy wood about it."

So yes, it's a fictional place, but I like having this more tangible picture in my mind, thanks to Moseley Old Hall, for Ferndean every time I re-read Jane Eyre!
Posted by Erin at 11:39 pm