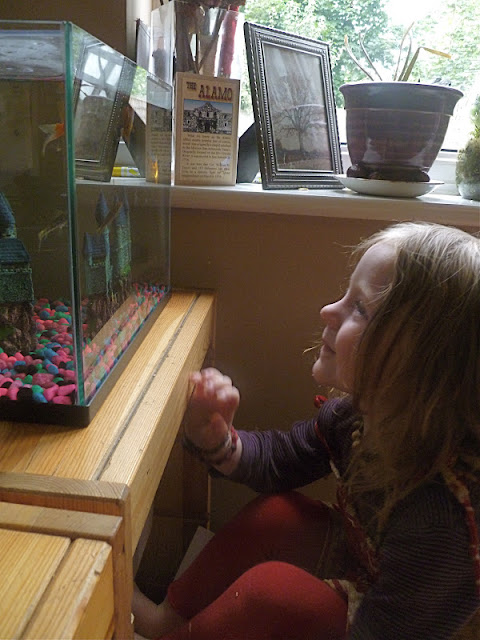 For Coo's third birthday, close family friends of ours gifted her with three beautiful fish, including two oranda goldfish which she called Klara [main character from the Nutcracker ballet] and Darcey Bussell [English prima ballerina].  The third fish was a little loach, which she named Lizzie, after one of her friends.

They have lived happily in our dining room for the last four weeks.  Coo loves to sit and chat with her fish, and all three boys have enjoyed watching them.

After reading the title of this post, I'm sure you're half-guessing what I'm about to say next.  Yes.  But the method and mystery surrounding the demise of Lizzie the Loach was anything but simple.

She can be seen in the above photo, both her and her reflection, swimming near the fairy castle that she loved and slept inside every night. Klara and Darcey Bussell are beautifully rounded golden and orange fish, with black and silver embellishments on their delicate fins.  Lizzie was plain: long and thin, with muddy brown flecked silvery skin.  However, she was the kids' favourite. She darted in and out of the castle, chasing the other fish, tidying and cleaning the fish tank with her suckery mouth.

This morning was an early one.  By seven, the three boys were already outdoors playing football.  Within half an hour, they were having their first scrap.  As they worked on sorting it out, I went downstairs to begin making pancakes for breakfast, a special treat.  I was preparing the coffee when Lefty, nearby, let out an exclamation. "It's Lizzie! I've stepped on Lizzie!"

Righty and Mr J appeared and commotion followed.  Lefty and Righty were both choking back tears, and everyone was talking at once, apart from Mr J, who seemed rather quiet.

Dan materialised from upstairs, where he'd been reading to Coo, and we encouraged the boys to remain calm while we worked out exactly how Lizzie left the fish tank and made it onto the floor, where Lefty had then stepped on her.  Slowly, each boy took a turn to explain his movements over the past thirty minutes.  Each one insisted that he did not know what had happened to Lizzie.  Dan didn't encourage any instant confessions; he merely explained that whoever had been responsible for Lizzie leaving the fish tank could also be the one who would help replace her with another identical fish. Dan went to fetch Coo, and carefully explained the situation to her.  She didn't cry, but she was clearly quite sad.

These fish are the first pets we've had, and although I knew the day would come when the kids would have to work through the sadness of saying goodbye to them, I didn't expect it to happen quite like this. In my imagination, it was going to be a simple case of finding a "sleeping" fish floating in the water near the top of the tank!  This was anything but clear.

Lefty and Righty went into detective mode. They've been absorbing themselves in Encyclopedia Brown and Sherlock Holmes mysteries this year, and their brains seem particularly formed for sifting through the details.  Lizzie had been lying on the floor about half a metre from the fish tank.  The floor was dry, and the other fish appeared undisturbed.

Mr J began to suggest fantastical ideas for Lizzie's exit from the tank.  "Maybe she jumped into the air!  Or flew from the water," he said.

In the back garden, we dug a small hole in one of the flower beds and Lizzie was carefully buried.  Everyone began to get back to what they'd been doing before the drama, but much discussion was continuing around the mystery.  Lefty and Righty were very sad, and I noticed that Mr J's face seemed to have fallen, particularly after he noticed Coo's downcast reaction to the news of her pet's death.

I continued preparing breakfast while Mr J hung around the fish tank, talking to me. Suddenly, his words sank into my sixth sense... you know, that sixth sense that mamas have.  They weren't just words, telling a story.

"Maybe Gollum jumped out of the book and caught Lizzie from the water!"  He made a motion with his hands and mimicked the "Gollum" voice that Dan uses when he reads The Two Towers aloud to Mr J in the evenings. "Precious little fish..." he growled.

Mr J explained exactly what had happened after Dan asked him gently.  The older two were outdoors playing football when the idea had come into his mind to catch a fish, like Gollum.  He reached into the water and caught Lizzie "because I wanted to eat her first". She slipped from his hand and to his horror, dropped onto the floor. At that point, afraid of what he'd done, he ran away. Not long after, Lefty came along and stepped on her.

There has been no need to impress upon Mr J the seriousness of his action.  Rather, we've worked at helping him to feel part of the family again and accepted by all of us in spite of what happened.

I started to talk about how we learn from what we experience, but Mr J stopped me.  "I already know, Mum," he said sadly.

It made me think about how often I assume I need to vocalise "life lessons" for the kids, and in doing so, just make myself sound like a know-it-all!

So this morning, I've shut my mouth and refrained from sermonising, and watched Mr J work through this himself.  He's had to answer blunt questions from the older ones, as they've tried to figure out "why".  He's had to try to connect with his little sister again, as she's naturally felt rather cool towards him.

Lots of hugs have helped.  They might mostly be coming from me at this stage, but if I keep it up, who knows? Maybe the others will follow my example.
Posted by Erin at 1:34 pm