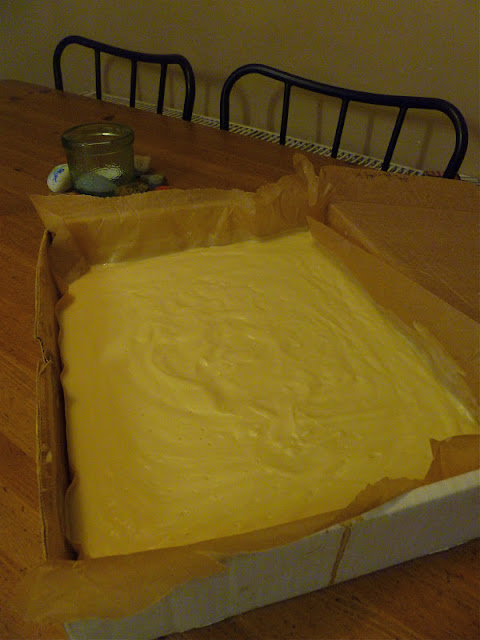 Another month, another batch of soap.  This is my fourth session of soap-making this year, so far.

I'm still using recipes from Smart Soapmaking, by Anne L Watson.  Tonight, it was the "All-Veggie Grocery Store 1", mainly because it uses only olive and coconut oils, of which I have plenty.  It felt a bit like Christmas when, before tea this evening, I discovered a little stash of unrefined coconut oil and extra-virgin olive oil in my under-the-stairs cupboard.  They had fallen behind my box of soap supplies and were overlooked during my last two soap-making endeavours.

This soap turned out great, as usual.  Anne Watson's recipes just don't seem to fail, so far.  I am learning to read the signs of the soap changing instead of continually checking the thermometer as I work, and find it easier each time to complete the soap without going over the instructions again, particularly around the initially tricky lye-mixing step! This latest batch was scented with equal amounts of patchouli and lavender essential oils. I love that addition of earthy patchouli; the floweriness of lavender on its own is too sweet for me.

I need more shea butter for the next batch of soap, and a few more essential oils.  A soap mould would be nice, too, as the cardboard box I've been using is starting to show signs of wearing out.  I've added a wooden mould especially for cold-process soap to my Amazon wish list, so we shall see!

I'm meeting up with other crafting friends soon for a craft afternoon, one I've been attending regularly.  Originally, I meant to take along my sewing machine, but instead I'll be working on our family's Christmas cards.  I've been sending cards with enclosed family photos for the last ten years, mainly for the benefit of faraway family and friends.  Most years, I've purchased cards, but for a handful of crazy Christmases, I've made them.  It's a bit like giving birth.  You forget about the intensity of it until you go through it again. So yes, this year I'm making cards. In spite of the work, it is satisfying to see the result and know that somewhere in the world, loved ones who aren't able to connect with us often will be appreciating those handmade cards and photos.

Since I've been going on about all this homemade stuff, check out more eco-friendly ideas from Beth, one of the hostesses of Your Green Resource.  She's gathering plenty of great links from other bloggers centring around real food recipes, upcycled and repurposed projects, organic gardening, thrifty solutions, and natural/green DIY.  If you share any of these interests, you'll love this concentration of information from other bloggers.