As I leaf through old journals I see in them more stories, tributes to long-ago friends that need to be told.  Here is one.  It's not a cheerful story but rather my first real confrontation with death as a happy-go-lucky eighteen-year-old.

The summer before I went to Bible college in Scotland I worked at a bakery deep in Southern Indiana's Amish country.  My place was in the "cake room", where a team of us [mostly Amish apart from me and a few others] turned out 800-900 angel food cakes daily. I washed endless cake pans, turned out cooled cakes, and mopped floors.  My favourite job was mixing up the cake batter, folding in the egg whites by hand, up to my elbows in sweet-smelling batter.  Esther was one of my co-workers, a tall, fair Amish girl just a year older than me, soft-spoken and quiet.

I returned from Scotland to hear that Esther was dying.  She had told me before about the pain she suffered from.  While I was away, she found out that it was cancer.

Another friend, Mary Teresa, and I went to visit Esther. It was a pitch black night at an electricity-free Amish farm, stumbling out of the car in that dark up to a shadowy porch and into the clean echoing house.

Inside, kerosene lamps cast a strange brightness within their circle of light, making the unlit areas seem even darker.  The oily smell of the kerosene filled my senses and my stomach dropped.  I felt as if half of my breathing power had left me.  I can smell that kerosene again as strongly as I did then, right now.  I can hear the hiss of the lamps and the creaking of Esther's mother's rocking chair as she sat beside her daughter; also the sound of springs on an iron bed upon which several small nieces and nephews sat silently, tiny bare feet dangling from beneath their nightdresses. Other relatives reposed on various benches and chairs around the room, faces composed into a calm acceptance in the presence of the dying.  All around, set out on tables, were hundreds of "get well" cards inscribed with flowery, upbeat messages, creating a sense that this illness was only temporary and that we would wake up tomorrow to see Esther back at the bakery working away, pain-free.

Esther's dad sat on the bed with the little ones. His eyes were red and often a stream of tears would make its way down his lined face.  Esther's mother cried too, silently, sometimes.  Delilah, the fifteen-year-old sister, came in with a pink hand-crocheted afghan.  "I made this for the benefit supper," she said in a muted voice, showing it round the room.  We exclaimed over it as if a benefit supper was all it would take for Esther to be well again.

Some relatives stood up, filed quietly out, and more entered the room to take their places.  All sitting, speaking little, waiting.

Esther was so thin.  Her complexion, once pink, was milk white.  Her cheeks were no longer red but now the same translucent colour as her skin.  Blue veins stood out against the paleness of her arms and hands.  Her eyes were glazed over with tears of pain.  She did not rest leaning back, full weight against her chair; instead she strained against it.  The pain was in her hips and lower back, a horrific pain that I cannot imagine, only that it was so strong the most potent painkillers could not relieve it.  Sometimes her dad or mom would lift her gently for a few moments to east the pressure put against her bones, ravaged by the disease.

I spent the forty-five minutes we were there working through my personal coming-to-terms with the situation.  I remembered Esther as she had been the year before at the bakery --gentle, conscientious, often troubled by the pain in her leg.  I remembered the strange, intense impression I had one day when Esther mentioned the pain.  I was scraping the crumbs from the wooden cake-cooling table listening to the sound of her voice die away when suddenly I thought, "In a year she will be dying."  Just as quickly I dismissed it as my natural tendency to dramatise, but that night, watching Esther, I knew it was that uncanny intuition that I have sometimes, that foresight that keeps me connected to a spiritual world, preparing me for her death.

Mary Teresa stood to go and I followed her.  Our shoes sounded heavy on the wooden floors as we crossed the room.  I took Esther's hand and whispered that I would pray for her.  Her voice was light and she laboured for breath.  "Thank you.  Please come again."

As her hand, weightless as air, slipped from my grasp, I think we both knew I would not be back.  When I looked into her eyes, she was crying, whether from pain or remembrances, I don't know.  I was stoic as we left and did not feel emotional in the car on the way home.  I was too shocked into reality to feel anything.

Back at home, I was questioned about my visit abstractedly by busy family members.  "She's dying," I said.  Oh, wasn't there anything that could be done?  "No, she's dying."  It did not seem real or possible to any of us that someone just a year older than me was dying of sudden cancer.

It was two more months before Esther passed away.  She died one of the most painful, lingering deaths I can possibly imagine.  I saw the notice of her death in the newspaper, just a few days after Christmas.  When the telephone rang that night and someone shouted down the stairs that the phone was for me, I knew it was Mary Teresa.  I listened to her tell me what I already knew and thanked her for phoning.

In the fifteen years since, I've experienced other deaths that have been much closer to home than Esther's.  However, I was reminded of her story again a few weeks ago when friends and I finished studying Psalmist's Cry: Scripts for Embracing Lament.  This book was a brilliant exposition of our need to walk through pain and suffering with others, maintaining that if we try to isolate and inoculate ourselves from grief, we miss out on the blessing found in lamenting together.  Looking back on Esther's story, how appropriate it was that her family and friends were right there with her, mourning as a community while she passed from this world into the next. 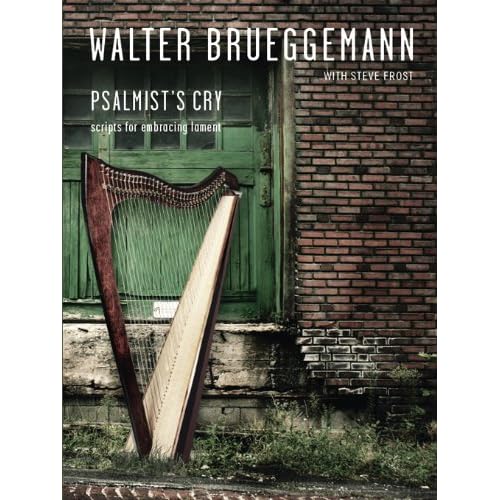 "We who have run for our very lives to God have every reason to grab the promised hope with both hands and never let go. It’s an unbreakable spiritual lifeline, reaching past all appearances right to the very presence of God where Jesus, running on ahead of us, has taken up his permanent post as high priest for us..."
--Hebrews 6.18-20
Posted by Erin at 5:50 pm