A beautiful Bank Holiday Monday... what better way to spend it than soak up the sunshine at another National Trust home? 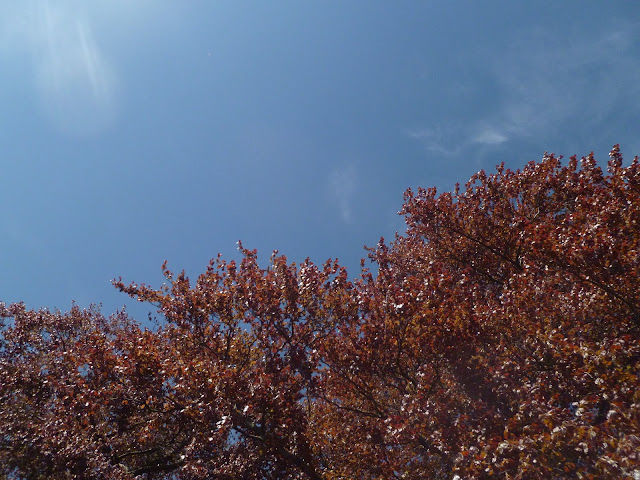 So the six of us, accompanied by our housemate James [one of "The Big Brothers" as Coo terms them] piled into the car along with a substantial picnic and off we went in the sun.

Our destination was Calke Abbey, which we've visited twice in the last year.  Once, on another sunny day, and then on a much greyer day during Grammy's September visit.

This is one of my favourite National Trust country homes.  It's decaying beauty is alluring in all types of weather.  Today's cheerful sunshine was wonderful, but it is equally atmospheric on a rainy, gloomier day.

The adventure started as soon as we realised that just about everyone else within a few miles' radius decided that Calke Abbey would make a great Bank Holiday day out.  Bearing in mind that on previous visits we could probably count the number of other visitors on one hand, today's crowd of hundreds was slightly overwhelming! 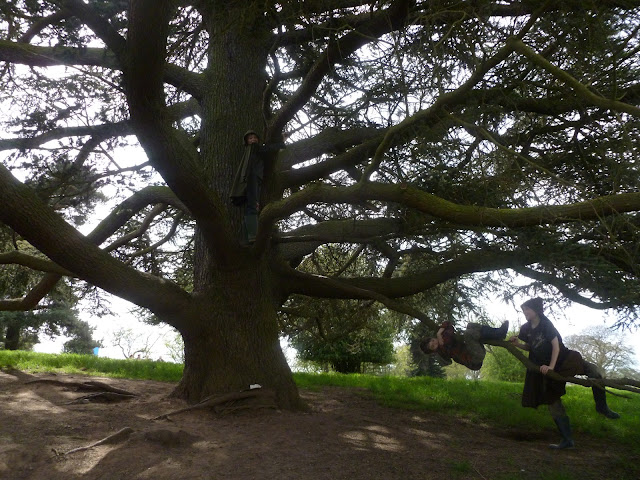 The three boys [Fili, Kili, and Thorin] shouted dwarfish war cries as our motley crew straggled through the hordes. We found a space on the slightly emptier hillside in front of the house near a great climbing tree and settled down to eat a picnic.

When most of the food had disappeared it was time to explore.  We found a grotto, lovely springtime trees with brand-new leaves, and some random deer straggling about in a meadow. 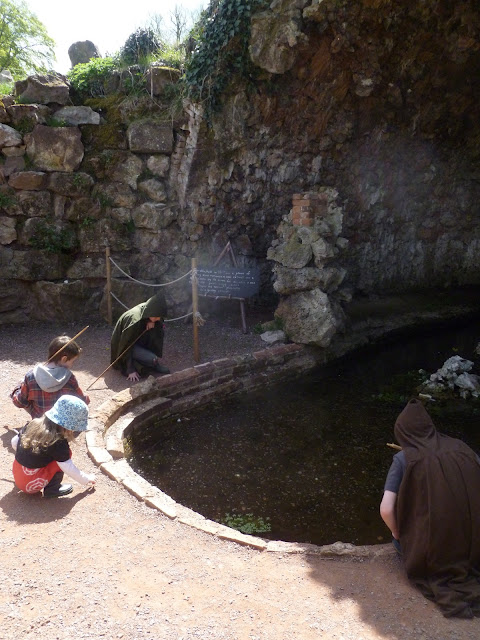 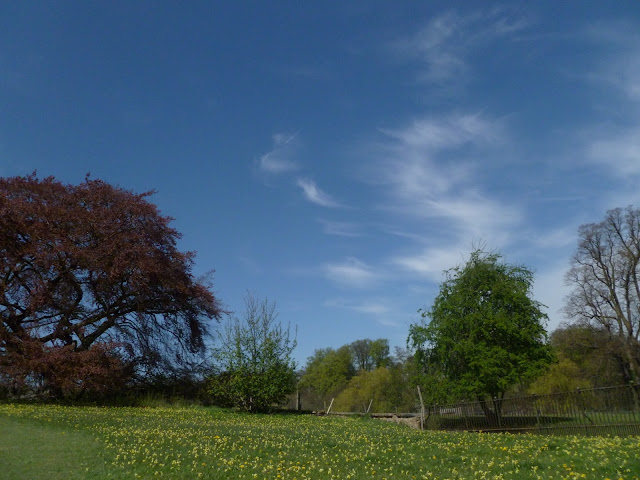 James courageously let Mr J try out his "real" camera.  They had fun taking photos of the deer. 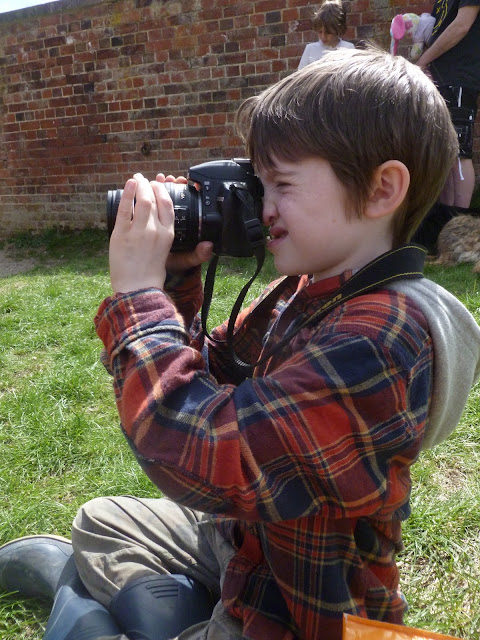 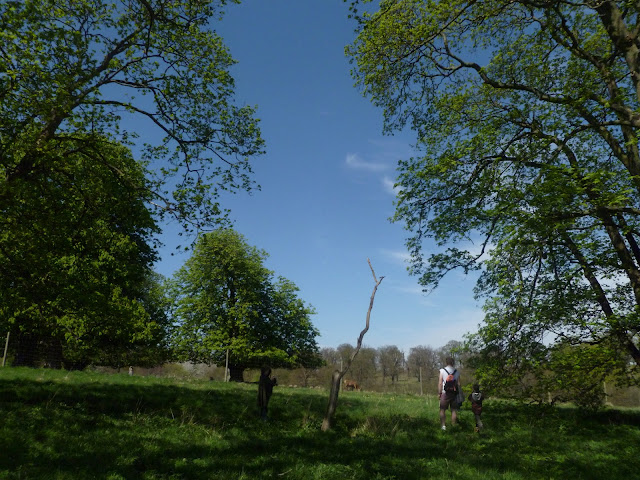 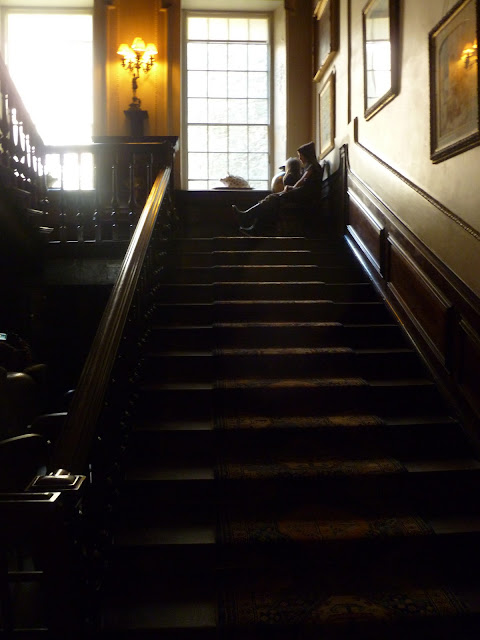 When our turn came to enter the house, once again we enjoyed and appreciated the majestic ancient home full of antiquated artefacts, old books, and the eccentrically huge, if not creepy proliferation of stuffed wildlife that Calke is so famous for. 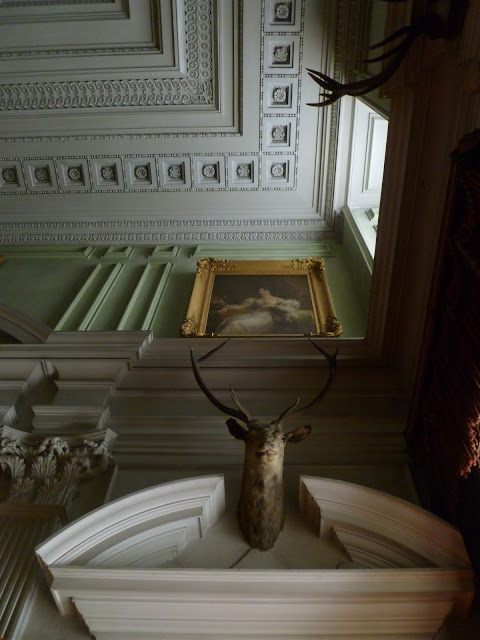 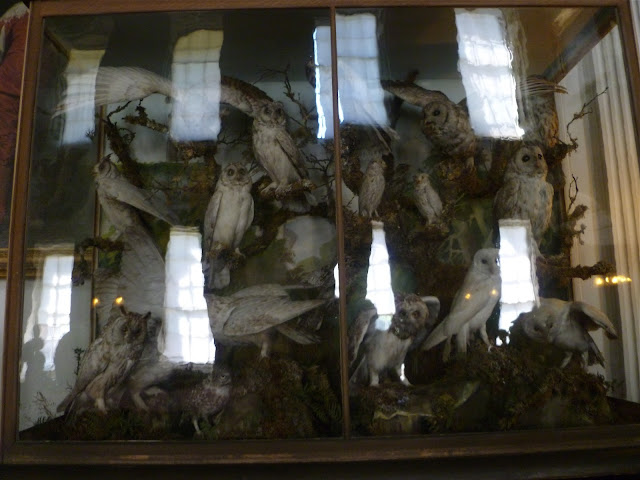 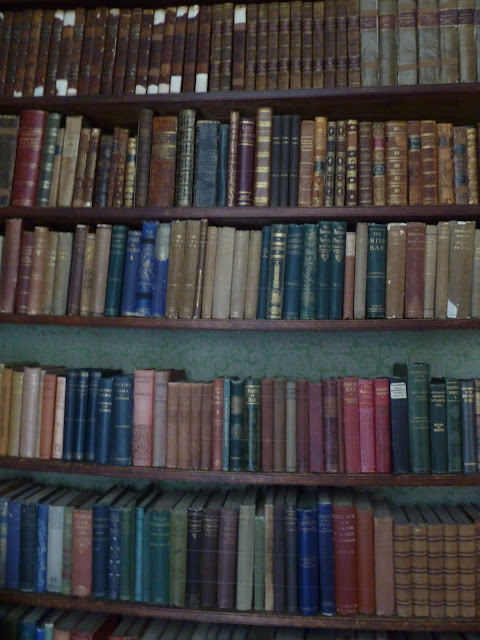 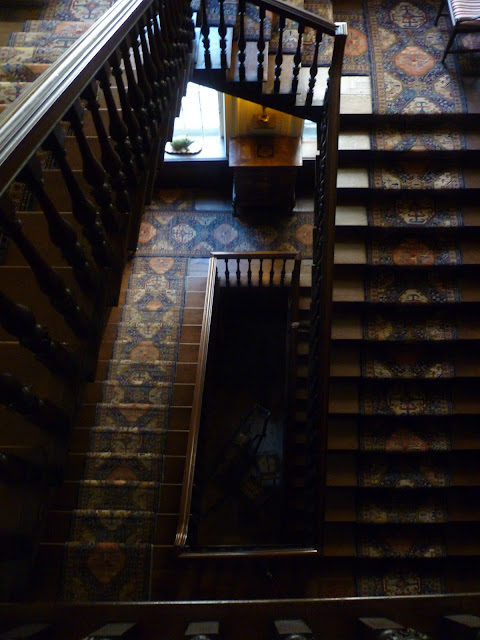 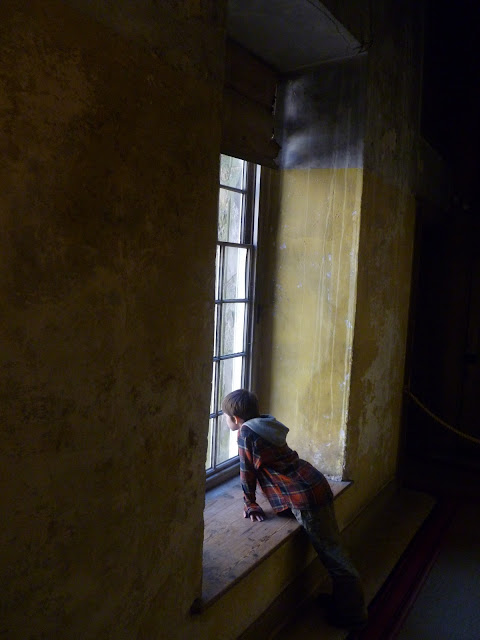 Calke is also famous for a network of tunnels underneath the house and grounds.  These were used once upon a time by monks at the religious establishment that was built on the same location about a thousand years ago. More recently, they were utilised as storage cellars and a servants' pathway [the owner didn't like to see his help!] 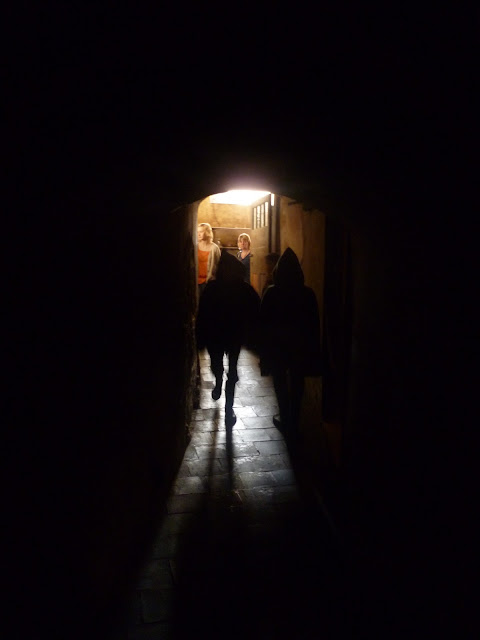 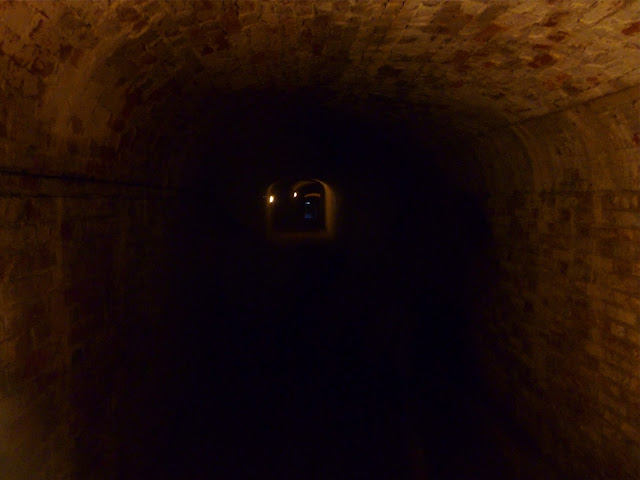 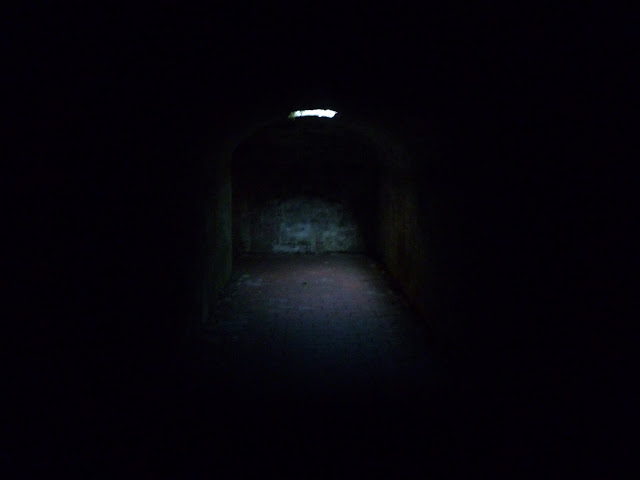 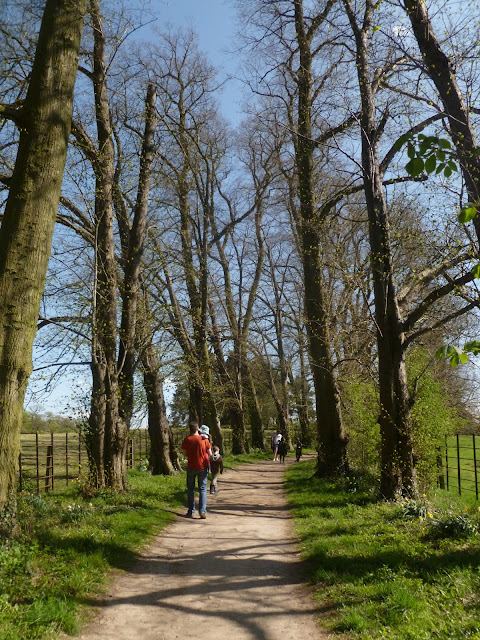 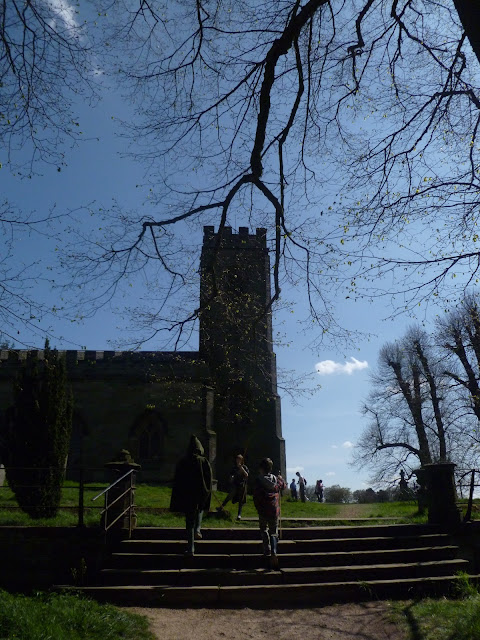 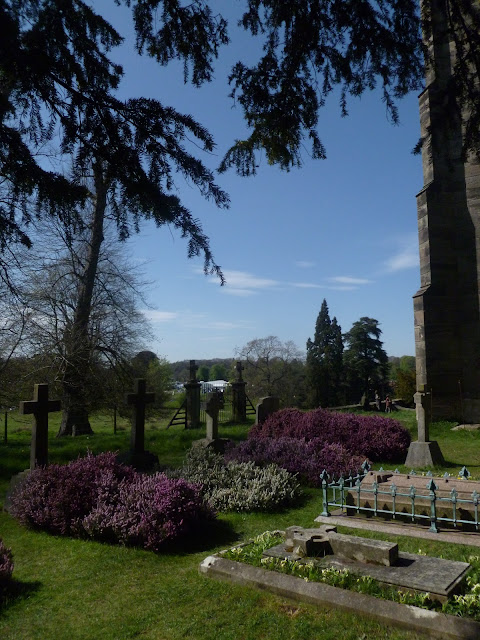 At the end of a long afternoon, it was treat time.  After Coo had finished her rather small ice cream, she knew just who to ask for more... James. 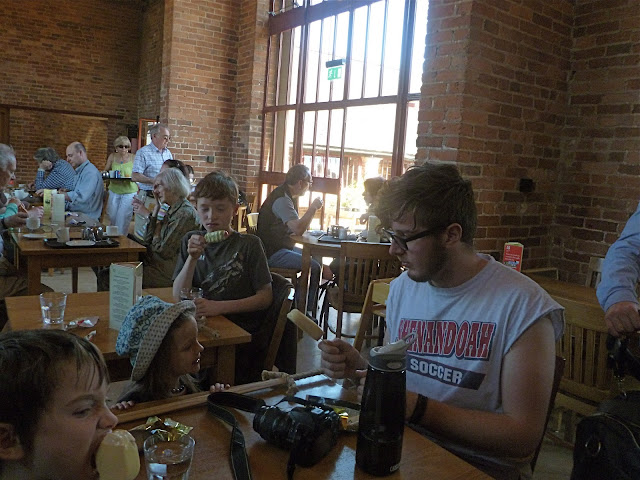 After such a busy, sunshine-filled day, we knew a plan had to be put in place to stop Coo from falling asleep on the way home.  Miniature bars of Green and Black's chocolate were purchased to share round in the hope that they would aid in keeping her awake.

They did.  She ate slowly and delicately, as usual, and the chocolate puddled into a mass of molten chocolate in the heat.  James was sitting in the middle of the car on the way home in between Coo and Mr J, and he offered to help her wipe her hands and face when she'd finished, advising her to eat the remaining chocolate quickly.  She clearly agreed but also wanted to make sure her dignity stayed intact.  Before she shoved the mess into her mouth, she warned him coolly; "Don't watch me!"
Posted by Erin at 11:30 pm