Ten Strings and a Goat Skin: Corbeau... a review 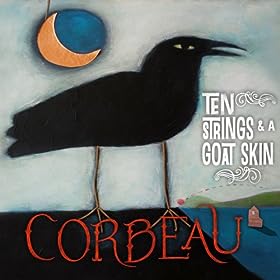 I wrote a review of Canadian band Ten Strings and a Goat Skin's new album, Corbeau. Read it here at Common Folk Music.

I really can’t remember the last time I heard of a three-piece band, stomping out cèilidh melodies and occasionally singing along, from Prince Edward Island.  Actually, I’m not sure if I’ve ever heard of a band from Prince Edward Island.  I haven’t a single word to say in my defence, either, except that my knowledge of P.E.I. is rather narrowly confined to the Edwardian era of L.M. Montgomery’s novels!   Thinking about this Canadian island’s historical connection to settlers from Scotland and Ireland, it makes sense that their influences clearly sound Celtic. They self-released Corbeau last month, an epitome of toe-tapping wonder.  The entire album makes you want to get up and dance, full of good cheer.  My four-year-old daughter subconsciously gave in to the music and went to fetch her ballet shoes as Corbeauplayed in the background.

Corbeau has a perfect balance of music and vocals: enough lyrical interest to keep the album from morphing into a full-on cèilidh, and wordless silence during instrumental tunes when the music speaks alone.  Band members Jesse Pèriard [guitar and banjo], Caleb Gallant [cajon, bodhrán, djembe], and Rowen Gallant [violin, mandolin, and bazouki] blend traditional music with their own compositions.

“Huginn and Muninn” kicks off the album.  It’s an uplifting, fiddle-led, tradition-fed tune.  Sufficiently joyous, we move on to “The Grey Funnel Line”, driven by an energetically percussive guitar. “The Night They Moved the House” is a classic story-ballad, ending with a hand-clapping, catchy chorus.  “Kick the Crow” brings a minor note into the mix, but is none the less spirited, with impressive fiddle-work from the band’s violinist, Rowen Gallant.  Introducing a more sedate –or inebriated– note into the mix is a rendition of an old Cajun drinking ballad, “Parlez-Nous À Boire”, loosely translated “Let’s talk about drinking”.  The slower thread continues with “The Uniform”, a regretful goodbye from a soldier dying far from home.  Next is an instant pick-me-up, an integrated trio of fiddling tunes: “Napoleon’s: The Drunken Police Car/The Box Reels 2/Music for a Found Harmonium”.  I love the wistfulness of “Farewell to Uik”, which follows, along with more dancing music: “The Liffey Reels” and “The Byzantine Reels: Fir Bolg/Tastes Like Grapes”.  At this point, the album appears to be finishing on a gentle note with the sweet French “Vive la Rose”. Instead, a splendidly robust version of “Bully in the Alley” blasts out right after, bringing everything to a close with just the right amount of fun.

FUN is the operative word here, I think!  Ten Strings and a Goat Skin are clearly having a great time with their music as they blaze their island trail.  Corbeau is sufficiently promising for such a young band and I’m looking forward to seeing where their musical path takes them.   It’s sure to go beyond the borders of their native P.E.I.