I push my way through the slog of normal everyday life.  Making breakfasts and lunches and dinners for a few of us or many, cleaning up messes both substantial and miniscule, washing clothes and dishes and small people's hair, reading aloud, thinking aloud, talking loudly, speaking softly. All these things I've done for so long, here in this place, standing still yet so busy.

But my thoughts are occupied in trudging through a long, slow goodbye to all I have known and grown to love in the last thirteen years of my life here in Britain. My normal is changing. Not just that gradual change of passing time, but the all-encompassing change that a move brings.  And not just a move down the hill, or across the city. This is a move to the other side of the Atlantic: a "big" move.  Culturally --yes-- but literally, too. This is going to be something Different.

So many thoughts, all sketchy but infused with feeling.  I remember the day I stepped from the plane onto British soil for the first time, sixteen years ago.  Late August sun blazed bright, but the air was fresh and crisp. I fell in love, totally enamoured, with the velvety purple colour of the heathered hillsides.  Blinking in that sunshine, watching the cloud shadows skim across the moors of the Borders, everything seemed new and invigorating but also somehow familiar. I felt as if I was returning to a place that had once been home.

After that first year, I returned, this time to England, two years later.  I spent many years settling, easing, establishing, learning.  It was much easier than I'd imagined, as if I was slotting my self into a place that was waiting for me.  So much of it fitted with me, with who I was as a person, just as if I were returning to a faraway home.

But now, all feels different.  Different is not knowing when or if we will be back.  Will it be as a family, or one by one, or not at all?  Righty is already saving money to visit New Zealand someday, and Lefty is currently [this week] considering a future career with MI5 when he's not storm-chasing.  I have a feeling that my wandering feet have been gifted to my children, too.

But someday I will return, even if alone, retracing steps to the places I love.  I will go back to Figsbury Ring, on the Salisbury Plain, and remember.  I will stand in the biting wind and look for my children, my friends, my father and mother, my sister and brother, my husband, there once more. The grassy mound will be empty, apart from myself, but I will see them as they were when we went there together.

I will return to this town, this grubby bustling Midlands city that so many seem to hate, and search for familiar faces.  They will have disappeared, but I will remember.  The familiar treks and paths will open again to me and the past will be there, waiting for me.

I'll go back to the north, to Scotland, where I first arrived.  I will see myself as I was then: seventeen, breathing in everything that was fresh as the cold sea-salt air, new and exciting, and wonder where the years have gone.

It's a weight, this responsibility as a parent.  Which culture to choose for our children?  Because, unlike many, we can choose. We take our own with us, I know, but as parents we're not everything to them.  They will soak up their environment with us, the beautiful as well as the ugly, but the further culture will wash over them too and become part of them. Their accents will change and their horizons increase. Their days of riding round in tiny muddy circles on little bikes in our pocket of a back garden will expand to include gravel roads and grassy fields and bigger bicycles, and something Different. Our car trips and adventures to National Trust homes, our train journeys, the hours spent walking around our town, will all be exchanged for something Different.  I'm capitalising Different because for me it is like the personification of the new.

I don't want to fear Different even though there is so much to fear, because in reality I have no idea what Different will look like.

I only know what I will miss right here, right now, in this Everyday. 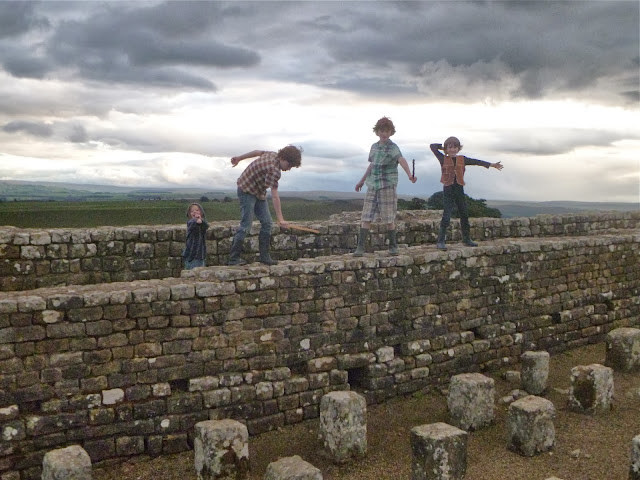