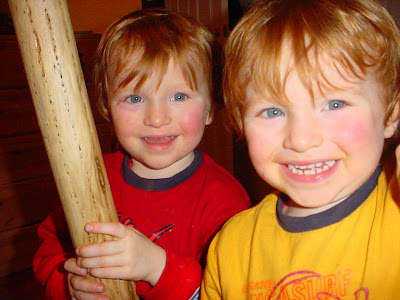 "Do you have any history of twins in your family?"
Yes, that really is the question they asked me as I was having my first ultrasound scan during my first pregnancy!
There are so many things I can think of now as a response to this loaded question.  Something informative? "The only way twins can be genetic is through the mother.  Some women have a pre-determined genetic tendency to release two eggs during ovulation resulting in fraternal [non-identical] twins." Or something rude? "If I did, what's it to you?" And last but not least: "So what are you trying to tell me?"
But I didn't say anything, not that I can remember.  What they were trying to tell me, and eventually did, was that they were seeing two babies.
I don't recall thinking very much at the time beyond wow.  As you do, when you're just 22, married for five months, and still growing accustomed to your adopted country of two years.  I was excited about becoming a mother even though it wasn't quite happening in the way I'd imagined.  I'd had this basic idea of walking around with one baby in a sling, an idea that soon began to slip away as I grasped the enormity of the situation.  Our tiny two bedroomed flat with its closet-sized rooms seemed to fit with the imaginings of parenting one baby. However, two?  My intention of having a home birth also faded away.  I was informed that under no circumstances would I be allowed to birth at home, as I was considered high risk.
Even writing that now sets my teeth on edge with irritation.  I swallowed everything I was told, soaking it up and accepting it blindly.  Ironically, I'd always been the type of person to do my own research.  Sometimes I look back and wonder why I didn't ask questions.  I think it was partly because I was floating around in a dreamy haze of twin pregnancy hormones.  Also, life in the UK was new to me;  I was still under the impression that the people in charge could be trusted and knew what they were doing!
As much as I look back and regret that I went along, sheeplike, with the flow, I don't question what happened to me and wish to change it.  I'm thankful that I had the experience I did, as I feel it gives me a certain amount of empathy with mothers who've had pregnancies and deliveries that haven't gone as they envisioned.
At thirty-six weeks, I went into the hospital for a routine check and was immediately admitted, as my blood test results were abnormal.  The decision was made to induce labour, as I appeared to have pregnancy-induced cholestasis, a condition in which your liver stops filtering toxins from your body.  If it takes place early in pregnancy, it can result in stillbirth.  I was hardly early on; thirty-six weeks is generally considered full-term for twins.
So, induction... heavy labour almost immediately... drugs given to control hyper-stimulation of my uterus... gas and air offered and declined... told if I did not have an epidural there was a high risk of having the first twin born naturally and the second born via C-section. In a panic, I chose the epidural.  In reality, they were both head-down and in the perfect position to be born naturally.
Panic.  Sadly, it was this way.  As I've learned in the eight years since birthing my firstborn boys, it didn't have to be like that.  But it was.
Looking back, I wonder why they were so determined to control the birth of my boys.  At no time did my babies show any signs of distress during their constant foetal monitoring.  A friend has since given birth to twins at the same hospital and was treated very differently.  Perhaps the additional six years is the key to the change.
Anyway, our boys came into the world in the midst of noise and panic and many people -students, doctors, midwives- and they were beautiful.  Long-limbed, skinny, identical, with coppery hair and entirely different voices.  Lefty had a lion's roar and he ate like a gannet.  Sleepy Righty breastfed twice in the first twenty-four hours and his wail was mournfully, pitifully hungry.  After a threat from an impatient midwife about "cup-feeding him formula", the shift changed.  A much more sympathetic midwife arrived on duty and showed me how to breastfeed them at the same time.  Righty was able to eat properly after that, when he joined his brother.

And that is what I did.  For months.  Even when they screamed constantly after being fed, I thought it was normal. I fed them almost continually, and assumed it was par for the course with newborns when they vomited up half of what they were eating because it was too much.  I didn't know anything about colic then - didn't really know anything about it until after we had already soldiered through it and were out on the other side.  I struggled to keep up with all the other singleton mothers I'd made friends with through breastfeeding support groups and courses, not realising fully how different my crazy life was from theirs.  A few years later, when Mr J came along, the silence and calm surrounding his arrival showed me what life could be like with just one.

But our first two... they were born as they live.  Charging ahead, full-lunged, protesting, courageous, confrontational, questioning, knights of the Round Table or the Jedi order or of Gondor or Narnia, depending on whatever imaginary land they're living in at the moment.  Storm-chasers rushing out to meet the tornado face to face.  Our sons of thunder. 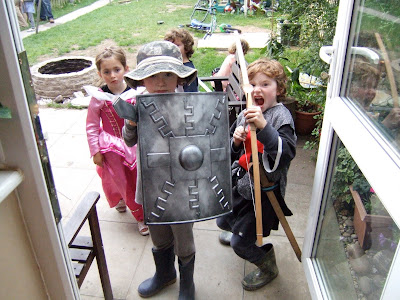