It was a Dark and Stormy Night

Outdoors, anyway.
Safely inside, though, the howling wind was a perfect soothing backdrop for some cosy kitchen activity.

The cupcake creations are the obligatory Chocolate Fudge of the Nigella variety.  The icing lost half of its usual chocolate content as the people I'm making these for won't appreciate that added bitterness, being the sugar lovers that they are. 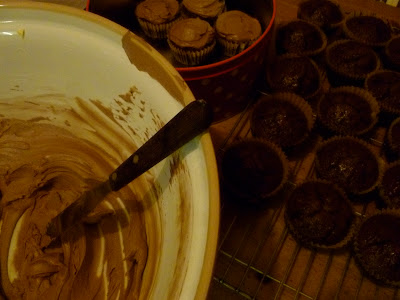 Musical accompaniment was provided by this brand-new album, which arrived in the post yesterday: 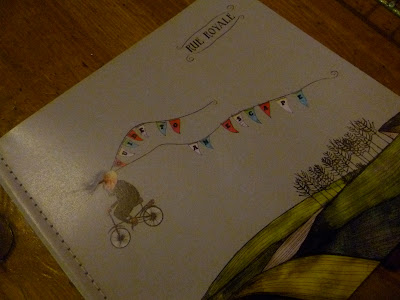 And the predictable refreshment was... of course, er: 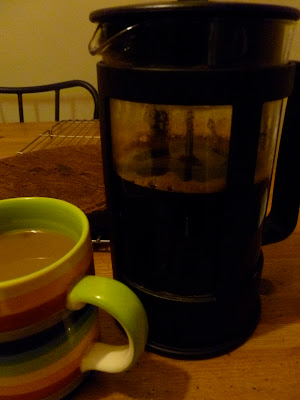 Last but not least, I decided to have a look at my appearance minus my eyeglasses.  Coo broke them a few weeks ago, and I haven't yet sorted out an appointment to have an eye test, before I can order a replacement pair.

Everyone else has grown accustomed to my glasses-less state, except for me.  I don't spend much time staring into mirrors at myself.  Last Sunday, I donned a pair of ancient, crooked glasses I found in a drawer; however, I'd only worn them for a few minutes when Mr J said, "Mum, can you please take those things off your face?"  Needless to say, I did.  I am certainly missing the ability to see well, though not completely impaired without them.  I struggled in a large shop last week, unable to read the unfamiliar signs.  The FSFC [Family's Safety First Consultant, Lefty] told me I shouldn't be the one to look after him and his brothers as they played at the park because "someone might try to steal us and you can't see."  Making an appointment on Monday, Lefty dear.
Leaving you with...
Rue Royale - Guide to an Escape @ Sunday Folk Club from LN on Vimeo.
Posted by Erin at 12:06 am