So Little Miss Coo has recently birthdayed and shown off her new sling.  What of the boys?
It was haircuts all round last week thanks to our very patient friend and neighbour, Beckie.  Mr J opted for "not long and not short", which ended up looking like this, as seen yesterday with [or without?] the latest: first lost tooth! 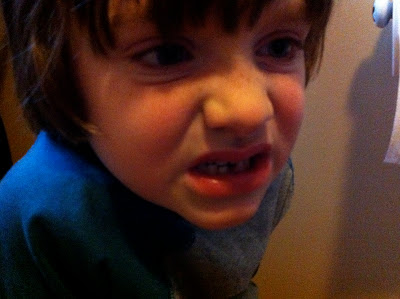 Righty opined he could not cut his hair.  He has to be able to do this [shows me what he means by violent head-banging motion] to the music.  However, laid-back son Righty has already nonchalantly chopped off a few curls in the front, "because I was trying to kick the ball into the goal and they were in my eyes". This necessitated a proper evening-out of the hair in front, and an all over trim.  We decided the best way to rock this look was to begin to train it to part in the middle, in preparation for the day when the shorn front will match the longer sides.  I cannot decide whether he looks more as if he's on his way to Wimbledon... 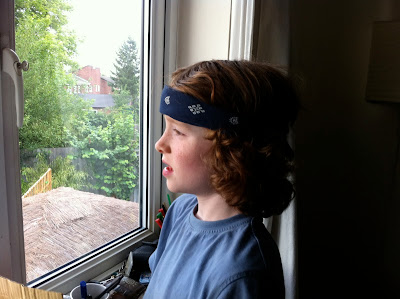 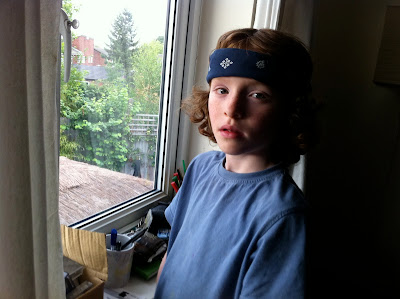 Lefty, also known as the family's own Safety First consultant, went for the [safe] choice: short.  Layers of richly shaded auburn curls fell to the floor, and a very grown-up nearly nine-year-old emerged. 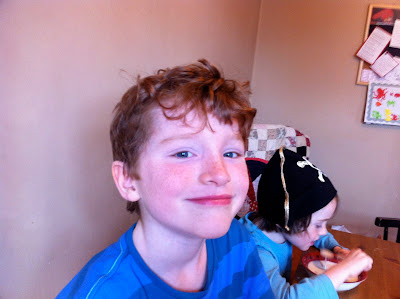 It's nice, this different hairstyle thing.  I don't have to rely on clothing to tell them apart from a distance, and all our friends who still struggle to distinguish between them can definitely do so now.  I wonder if The Boys will notice that people are referring to them by name instantly instead of waiting to guess/ask/figure out who they are.  Perhaps this will encourage them to take other steps to be more visibly different from each other.
And Coo?  How could we possibly be tired of seeing photographs of her?  Here she is again in the event that you'd forgotten how perfectly lovely she is.  Photographed sitting beside "Red Stick", the cringeworthy, sadly stereotyped Native American character in the 1950's Disney flick, "Davy Crockett". 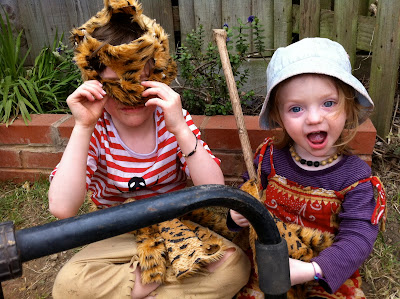