In the midst of a typically hectic weekday, the news dripped into my consciousness.
Between the literary onslaught of comical anecdotes from Asterix and Obelix books, the almost constant verbal narration of the latest happenings in Eldest, and reading about Jamela to Coo, I almost missed it.
Mr J's six-year-old voice drifted through the clamour. "Doggieland has been destroyed."
He sounded matter-of-fact, not at all disconsolate, and was prepared to give me details.  "It just exploded," he said.  "I visited to say goodbye right before it happened."
Doggieland gone.  Just like that.
We first started hearing about Doggieland around three years ago. As I sat on my bed feeding tiny baby Coo, window wide open to let in the summer air, nearly-four-year-old Mr J shouted through it for his missing imaginary dog.  "Tete! Tete!" [unfortunately pronounced "Titty"]
"Where did she go?" I asked nonchalantly, trying to ignore the slight awkwardness over Mr J's oddly named imaginary pet.
"She went back to Doggieland."
Over months and eventually years, his ideas surrounding Doggieland took shape. We heard constant stories about Mr J's imaginary dogs who lived there. Everything we could do, they could do better.  If an older brother scored a goal or two during Saturday football, "Chippy" was sure to have scored ten in Doggieland.  Grammy and Auntie Abigail were flying over from the USA for a month-long visit? "Perdita" had just been Stateside for three months. Mummy had made a yummy cake?  "Blue" made cakes just like that in Doggieland.  It also worked the other way, too.  If a mess was left on the floor or an accident took place, an imaginary canine would often take the blame.
Last year, Doggieland suddenly became more tangible.  It was actually a world within a world: Mr J's bed.  His stuffed toy dogs acquired names identical to the previously less corporeal dogs and lived on the bed.
As Tintin-mania took over all three boys last autumn, I noticed Mr J was mentioning Doggieland less and less.  In January, Daddy read The Hobbit to him.  During the last month, they've begun to slowly work their way through The Fellowship of the Ring.  Mr J is speeding through Asterix books at the same rate as his brothers. With all this extra reading, he's had very little time to spend in Doggieland.
But the nail in Doggieland's coffin was Mr J's decision to become a doctor.  Or rather, forget the becoming -apparently he already is a doctor. He has been writing his name on copywork pages as "Dr J Maley", and though he listened carefully when both Dan and I explained to him the necessary work that  he would need to do in order to become a fully-fledged doctor, he appeared to believe that he's already done all of that.  I offered to help him find a used doctor's kit set on eBay, but after hearing that it was a toy, he assured me, "I can't have it if it's not real.  I'm a real doctor, Mum."
He has offered advice to his grown-up friends over everything from bruises to estimated recovery time after an operation.  The genuineness of his belief that he really is a doctor is so concrete and absolute; I fear if I were to challenge it, the result might be similar to that of waking a sleepwalker.
The other morning, over breakfast, I asked him about the demise of Doggieland, wanting to hear from him exactly how it had come about.

Mr J [almost in the centre of the photo below, running in front of Coo] is still living with one foot in his imagination and the other in the real world, as he always has.  It's just that nowadays he's beginning to grasp the truth: his imagination is not reality. I'm reminded of the last chapter of the Pooh Bear books, when Christopher Robin realises that his imaginary land of the Hundred Acre Wood is beginning to slip away from him, and tries to communicate this to his understanding friend, Pooh Bear.  Then it's time for them to go... 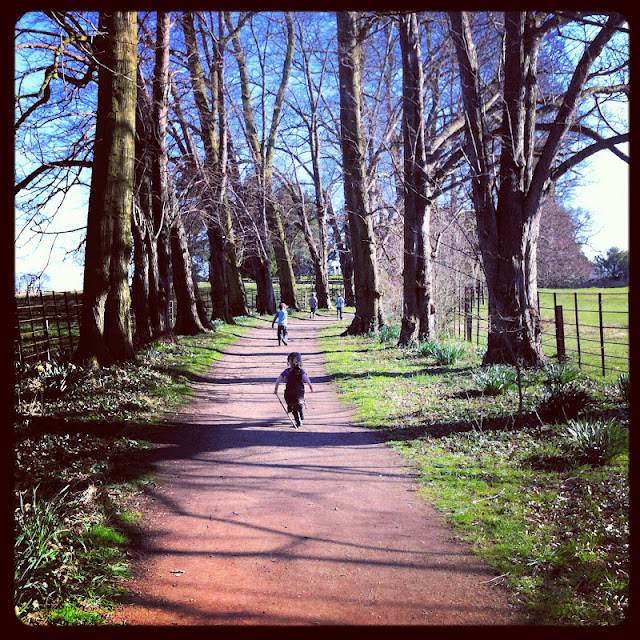 "So they went off together.
But wherever they go, and whatever happens to them on the way,
in that enchanted place on the top of the Forest,
a little boy and his Bear will always be playing."
-A A Milne, from The House at Pooh Corner
Posted by Erin at 9:55 am