Lefty has always been quite determined.  When he was barely a year old, he would throw an object, any object, and say "Ball." Whether it was a ball or not, he believed that the act of throwing it made it one. If we replied, "That isn't a ball.  That's a book/shoe/sandwich/whatever", it made no difference.  He would pick up the object, throw it again, and answer, usually more forcefully: "Ball!"  Of course, his word "Ball" could have meant "I will throw this no matter what you say", but the point is, he's always been very decisive about his interpretation of the world!

This mental tenacity has evidenced itself in other ways, too.  When he had just turned seven, he decided he was going to read The Hobbit on his own.  He began reading it aloud to me, stopping every few sentences to check a word or struggle with pronunciation.  As much as I felt tempted to encourage him to choose a book that seemed more suited to his age group, I chose to ignore that societal constraint I didn't even know I had and kept my mouth shut.  The crazy thing was, after just a few days, he was only asking for help once or twice per page, then per chapter, then not at all.  Within just two weeks, he was speeding through the book with no help.  I sat in silence, enjoying listening to him read a book that my head told me was way beyond what I should be expecting him to read.

Three years later, Lefty continues to read constantly, re-reading his favourites and always picking up literature that appears beyond him, yet still maintaining an enjoyment of simpler reading, like Beano and Tintin comics.  He loves mysteries, and has recently been reading classic Hardy Boys stories, as well as re-reading a book of Conan Doyle's Sherlock Holmes adventures that I read aloud to the boys a few months ago. 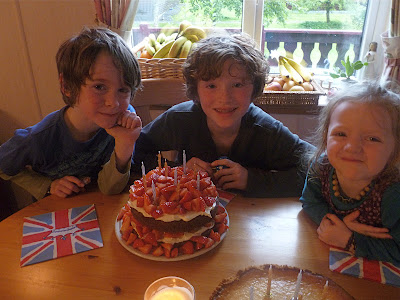 Lefty is a wonderful brother, and we are so thankful he is part of our family.

What would you like to do when you grow up? Be a policeman

What's your favourite cake or pudding? Everything

Who do you like hanging out with? Paul Gladwell, Grammy, Dad, Mum, Coo, Righty, Mr J, lots of other people

What do you enjoy doing with me? Playing card games like "Kings in the Corner"or "Golf"

What do you enjoy doing with Dad? Having sleepovers

What do you enjoy doing with Coo? Playing tea-parties

What do you enjoy doing with Righty? Playing detectives

What do you enjoy doing with Mr J? Playing with Lord of the Rings figures

What's your favourite thing to do on your own?  Read

What's your favourite family day out together? When we go out for lunch

What makes you happy?  Playing games with people

What makes you sad? When I hurt myself or have an accident

What do you enjoy learning about the most? History

If you could choose any time in history to live in, when would that be? During the Roman occupation of England

Is there anyone famous that you'd like to meet? Steven Gerrard [English footballer]

If there was any imaginary/pretend thing you could choose to do, what would it be? Live in Middle Earth