Our last morning in Scotland started with a two-hour cleaning session, as we determined to leave the holiday let where we stayed the week in better condition than it had been when we arrived.  I made cinnamon rolls, using a stainless steel water bottle in lieu of a rolling pin! 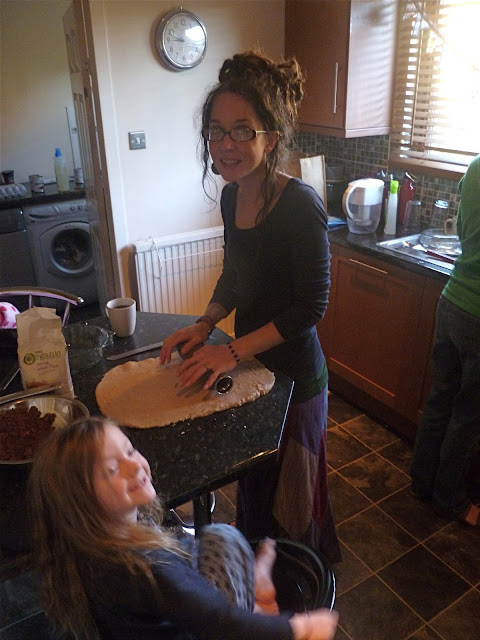 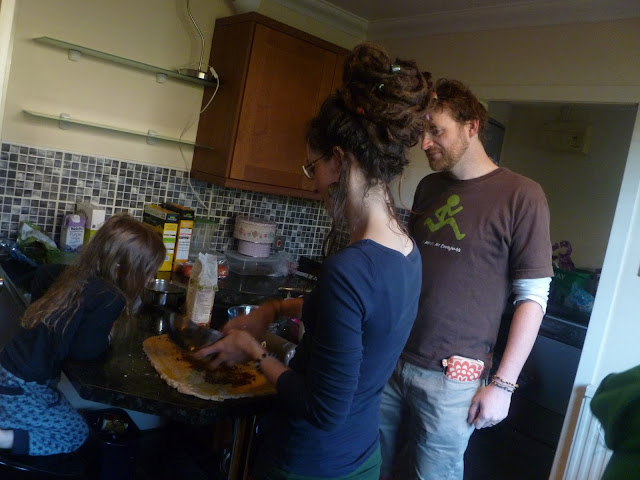 There was enough for all fourteen of us.  And then a bit more. 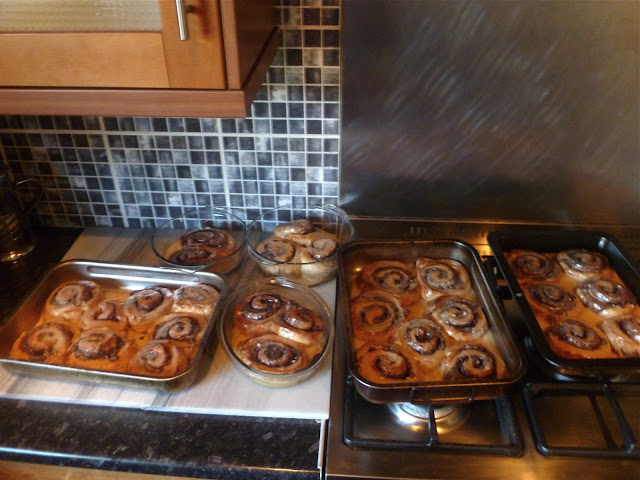 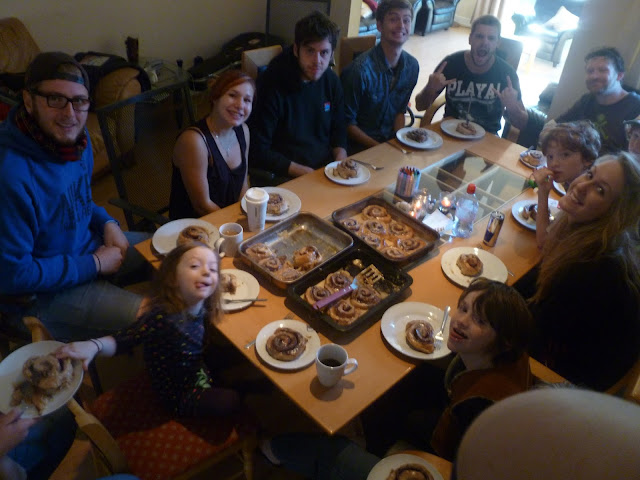 Finally it was time to get on the road.  The sky seems enormous in Scotland; I really don't know why.  That's just an impression I've always had. 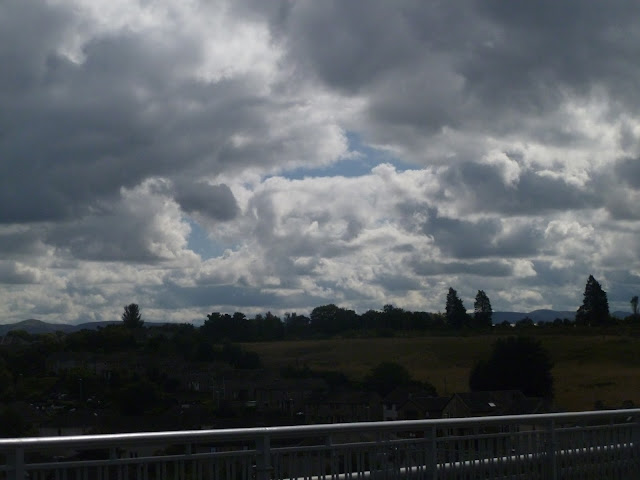 We had an entire day of travelling ahead of us, as we planned to take a scenic route through national parks and forests, ending up near Hadrian's Wall in Yorkshire before we finally found a motorway and headed home.  After three hours in the car, this was how things were looking. 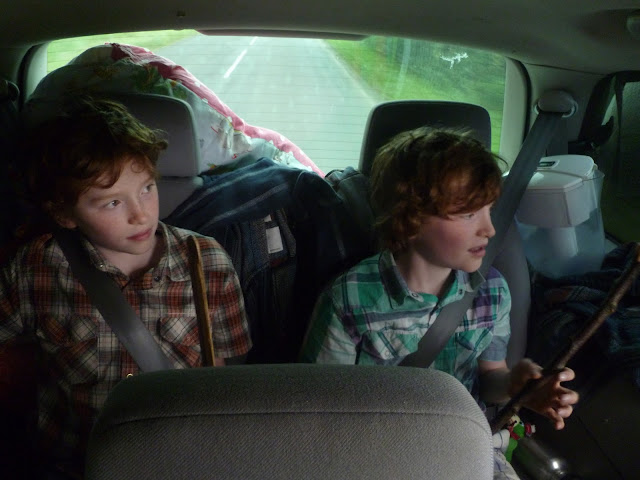 Coo.  Yes, there are crumbs and food remnants all over her clothes. 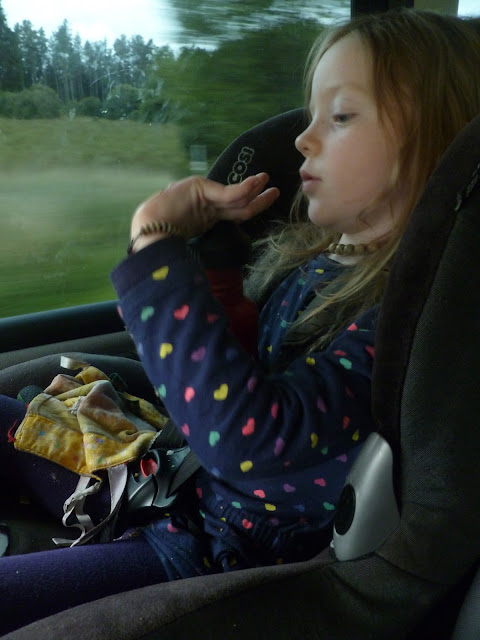 And Mr J, like a puppy dog, window open. 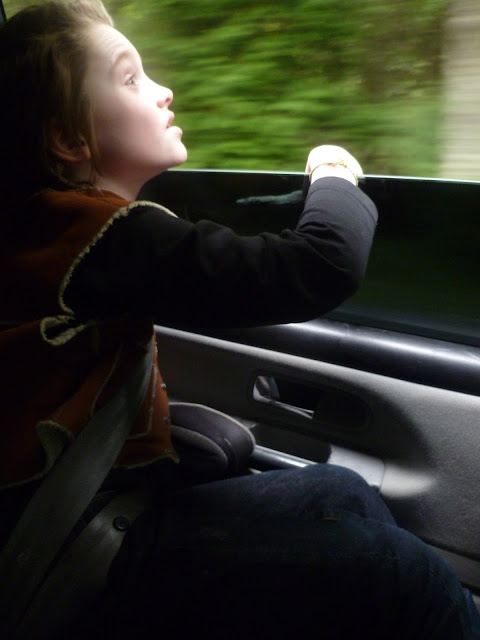 As we crossed the English border, Mr J opened his window and shouted "Goodbye, Scotland!" at the top of his lungs, which is, believe me, very loud indeed.

Taking the sting out of saying goodbye was the long-promised visit to World Heritage site Hadrian's Wall, the ancient stone boundary that stretches seventy-three miles across the width of the United Kingdom.  It was built by the occupying Romans in a last-ditch attempt to fend off the fierce Pictish tribes living in the Scottish borderlands.

Before arriving anywhere near Hadrian's Wall, we had a long drive through Yorkshire.  It was beautiful. 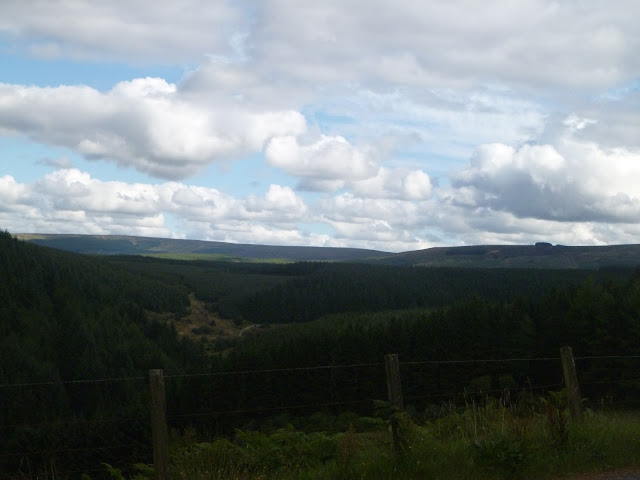 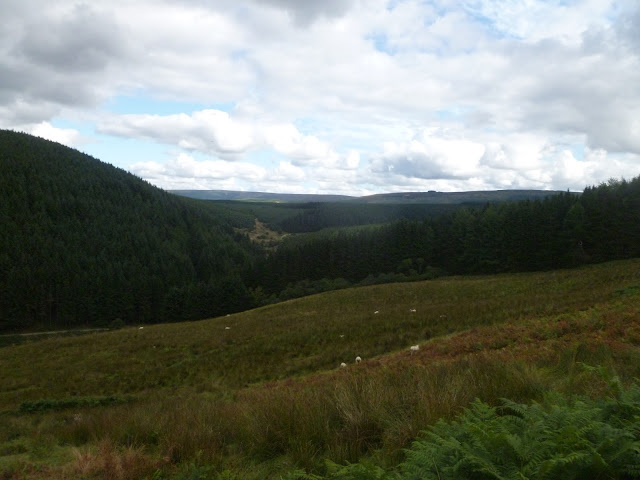 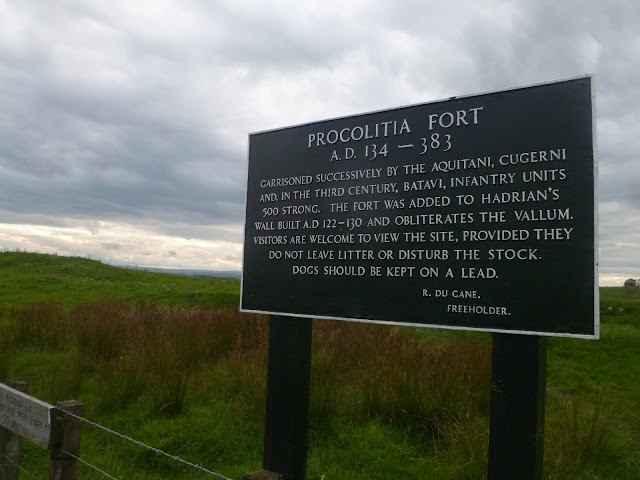 We stopped at Carrawburgh and stomped around in the temple of Mithras, long-abandoned.  Coo fell into a squelchy sheep-pooey mud puddle, spoiling what she weepingly termed her "best clothes".  After an initial mini-breakdown, she recovered remarkably well and happily consented to continue her adventure wearing pyjamas, jumper, and wellies. 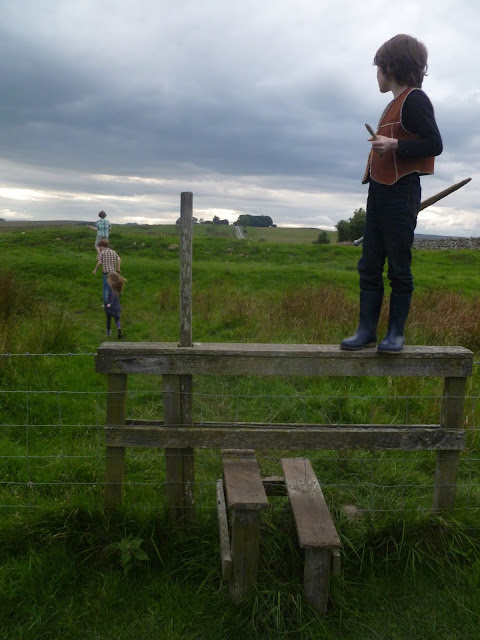 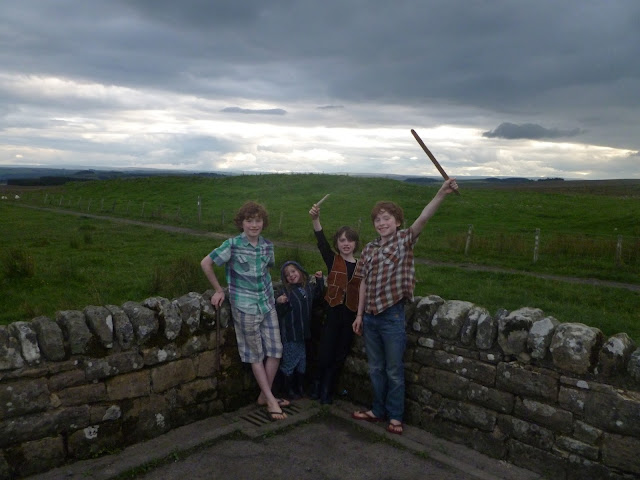 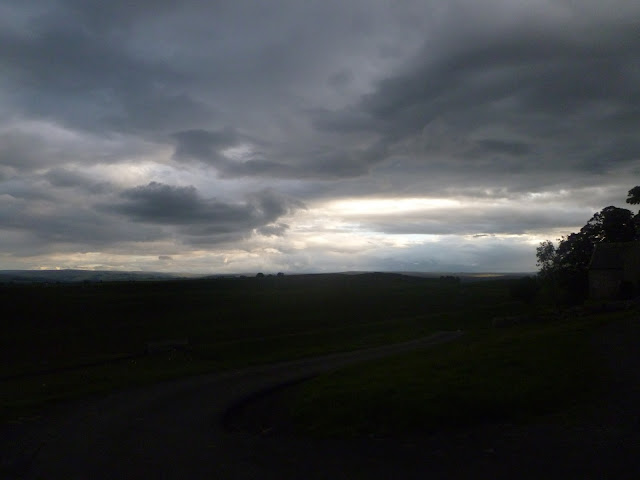 Our next stop was Housesteads, a National Trust/English Heritage site. It was past six o'clock at this point and too late to visit the museum, but we walked up the hill to the the actual fort. 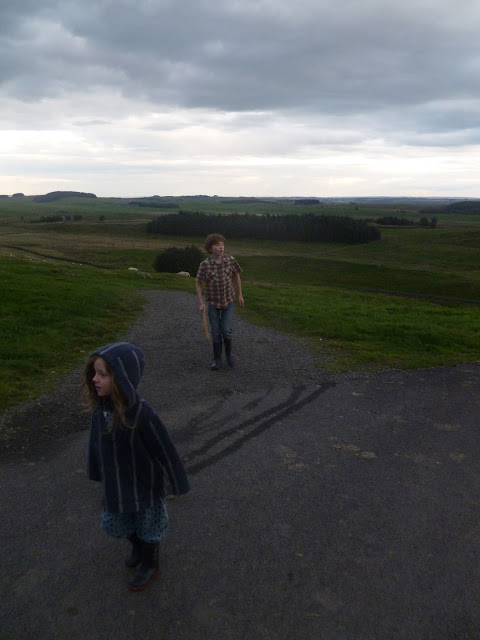 We spent over an hour in this isolated spot, enjoying the wonderful landscape and stunning views that stretched for miles. The darkening sky was overcast and filled with billowing grey clouds, so I cannot imagine how incredible the view must be on a clear day! 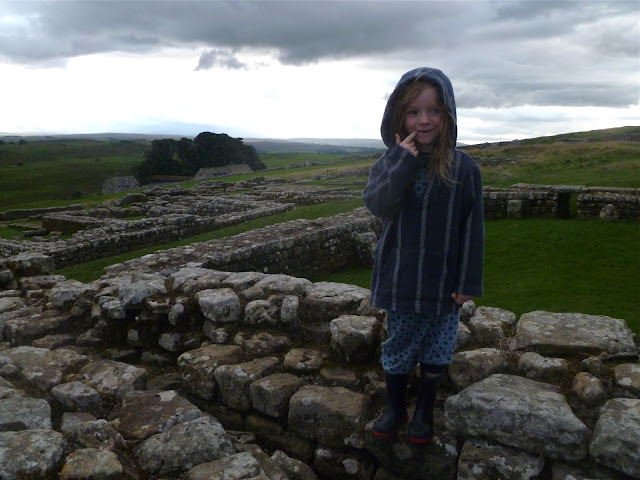 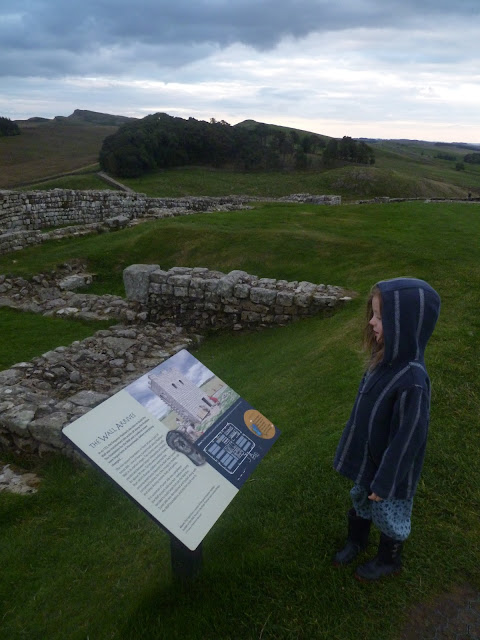 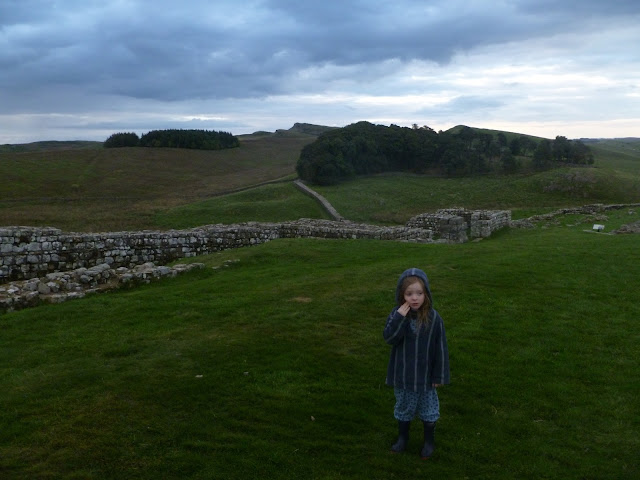 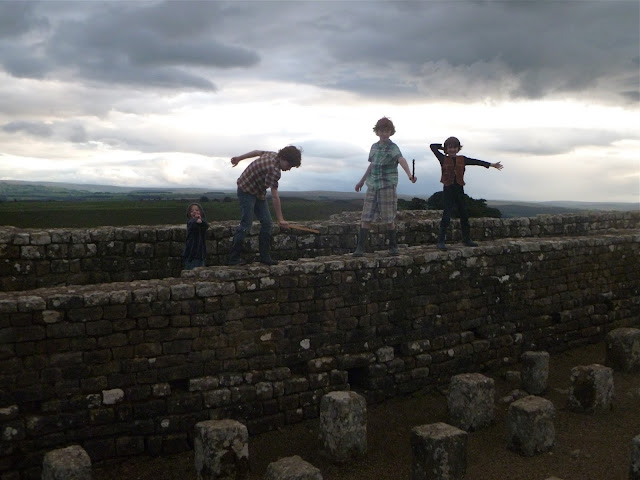 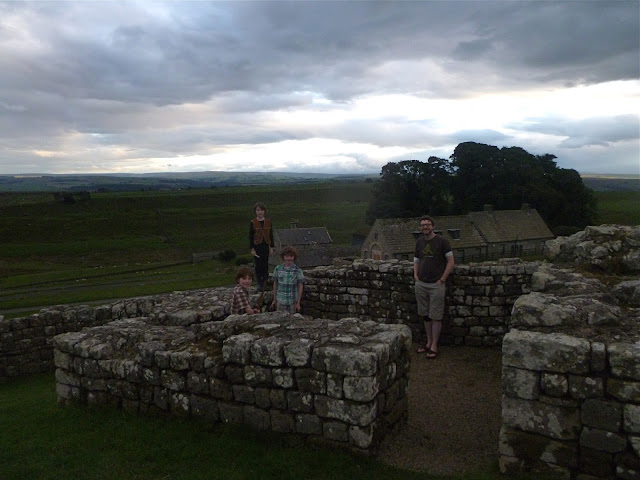 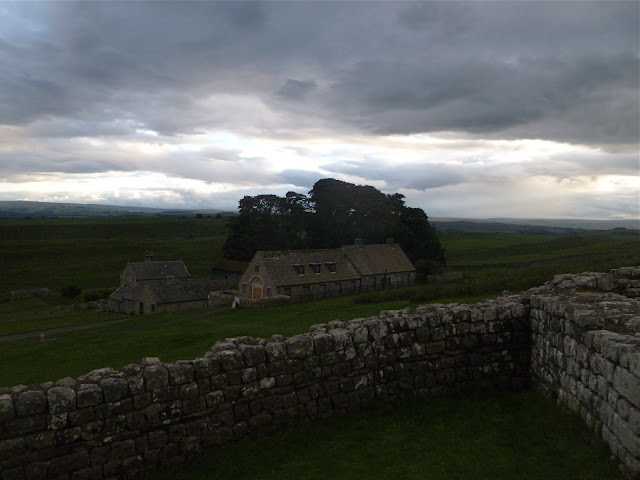 We walked to the bottom of the hill, up an incline, and left Housesteads, ready to leave the chill wind behind for a cosy four-hour drive home along the motorway.

It was wonderful to be back in the Midlands, in our own house, in our own beds.  Yet I don't think this trip to Scotland will ever be forgotten by any of us.  It was a lovely week, full of friends, fun, cold weather, sunshine, history, and adventures.